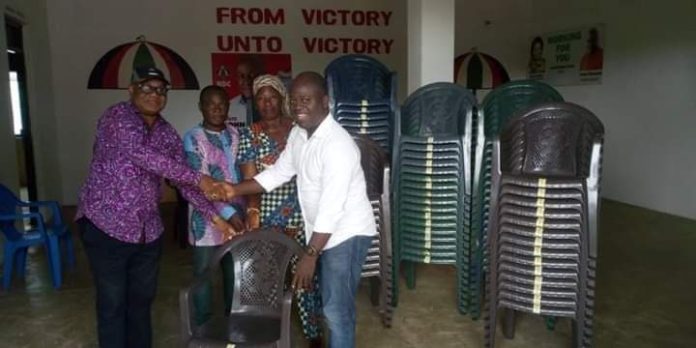 Former IGP John Kudalor has donated some 100 plastic chairs to the Agona East constituency of the National Democratic Congress (NDC).

The donation, according to him, is in support of the party’s activities in the constituency.

The donation has fueled  speculation of rising politicking in the police service as some men in uniform have already opted out of the service to seek positions.

Two police officers including the executive secretary of the immediate past IGP have left the service this year to contest on the ticket of the opposition NDC in both the Wa Central and Okere constituencies.

The donation of the Former IGP who traces his root to the Agona East constituency has made many in the area curious if Mr. Kudalor intends to enter partisan politics fully, and even contest the party’s incumbent MP Queemster Pokuaa Sawyer in the upcoming parliamentary contest as the latter is yet to go through vetting.

Meanwhile, a senior lecturer at the Department of Classics and Philosophy of the University of Cape Coast , Jonathan Asante-Otchere has downplayed the effect of the former IGP’s donation to the NDC especially in fueling party politics in the police service.

He is asking for circumspection in discussing the matter saying Kudalor should be judged by his performance in office and not his political affiliation.

Mr. Kudalor, he adds, is a civilian now and has the right to join any political party of his choice.

Ministers, others donate 50% of 3 months salaries to COVID-19 Fund