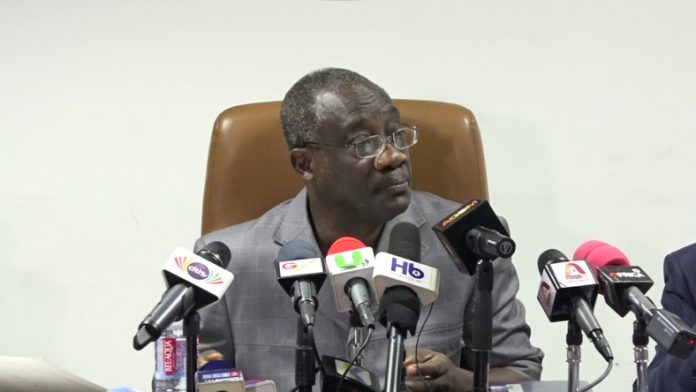 The Ghana Revenue Authority (GRA) is forecasting that beneficiaries of the Free Senior High Education programme being implemented by the government will pay more in taxes in the future.

According to the Commissioner- General of GRA, Emmanuel Kofi Nti, the programme is an investment to build skilled labour pool which will translate to increase in payment of more taxes to the state in future.

“The President has enabled us to have a Free SHS. I was privileged as a young student to have this CMB scholarship and it allowed me to go to secondary school alongside my elder brother. But for the CMB Schorlarship I would have been delayed. Now I pay tax not less than Ghc10, 000 a month. The Free SHS will lead to a situation where the youth will be paying more taxes in their future. So it is like investment that is being made to collect more taxes later,” he said during the opening ceremony of a two-day workshop for members of Private Newspapers Publishers Association of Ghana (PRINPAG) held in Koforidua.

The workshop which was under the theme: “Bringing the Informal Sector into the Tax Net-The Role of the Media” sought to train members of the Association on the various emerging tax issues as well as challenges to disseminate same to the Ghanaian public to help change the negative attitudes in relation to the payment of taxes in the country.

The Commissioner General underscored the importance of revenue mobilization to the development of the country and the achievement of the “Ghana Beyond Aid” hence the Authority has over the past two years rolled out several innovative mechanism such as Taxpayer Identification Number(TIN), Excise Tax Stamp, Paperless clearance at Ports, and Cargo Tracking Note(CTN), and recently deployed -Integrated Tax Application and Preparation System (iTaPS) an online filing system all aim at simplifying, processes and procedures to encourage payment of taxes and maximize revenue generation.

He also hinted of another intervention in the offing which is an e-payment platform to enable taxpayers in informal sectors pay their taxes through Mobile Money and Electronic Point of Pay device to help capture VAT transactions on real time basis.

He was therefore hopeful that the workshop will build capacity of the PRINPAG members to set the right agenda on taxation by helping the awareness creation through publications to help cause attitudinal change to increase compliance.

The President of PRINPAG, Andrew Edwin Arthur, said for the media in Ghana to remain relevant and be on top of issues in all other sectors of the economy, it is imperative for practitioners to specialize for media houses to get a pool of expert journalists to provide undiluted equal coverage to stimulate development.

“PRINPAG keeps lamenting the manner in which media practitioners are trained in Ghana, a situation that presents them no opportunity of specializing in any of the critical areas of the economy,” Arthur said.

He believes the workshop would provide participants the appropriate knowledge and skills to disseminate tax information to help GRA maximize revenue generation and mobilization.

The President of the Ghana Journalists Association, Affail Monney, admonished journalists in the country to relentlessly support revenue generation and mobilization strategies of GRA due to its critical importance to Ghana’s development.

UNIPASS Saga: GCNet’s system to be restored at ports as GRA intervenes