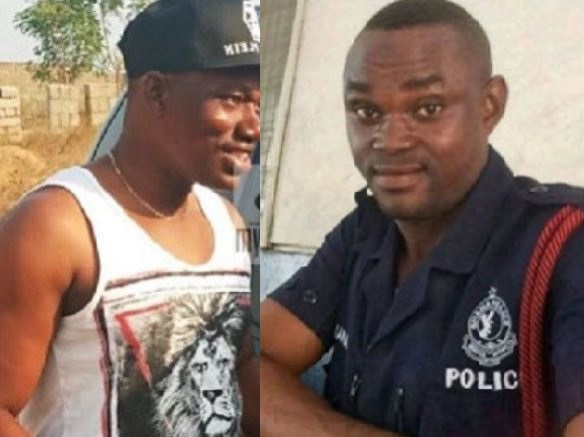 It has emerged that the two Policemen who were shot dead by suspected armed robbers at Kasoa on Wednesday, Sergeant Michael Gyamasi and Lance Corporal Awal Mohammed are among the thousands of Ghanaians who have their monies locked at the defunct gold trading firm, Menzgold.

According to Chief Supt. (Rtd.) Samson Addai Mensah, a former Senior Officer at the Kasoa Divisional Police Command, the two deceased policemen were part of a group serving and retired police officers who sued Menzgold in court over their locked up funds.

“I know these two murdered policemen very well, as I said we were all fighting Menzgold in court. I and the two of them have our cash locked up at Menzgold, they were part of us when we sued Menzgold in court demanding the release of our funds. Our group is made up of both serving and retired Policemen. It is sad and unfortunate that they’ve passed on while their monies remain locked at Menzgold,” Chief Supt. (Rtd.) Samson Addai Mensah said on Asempa FM as monitored by Kasapafmonline.com.

Some 100 retired and active Police Officers at the Kasoa Divisional Police Command in December 2018, led by Chief Supt. Samson Addai Mensah filed a writ at the Accra High Court against Gold dealership Company Menzgold, in a bid to retrieve their locked up investments.

The late Sergeant Michael Gyamasi and Lance Corporal Awal Mohammed were gunned down at Kasoa Budumburam in the Central Region on Wednesday 28th August 2019, by armed robbers while on task force duties on the Kasoa-Winneba highway.

Three persons Ibrahim Zakaria, Isaac Amissah and Dominic Commey have since been arrested in connection with the murder.