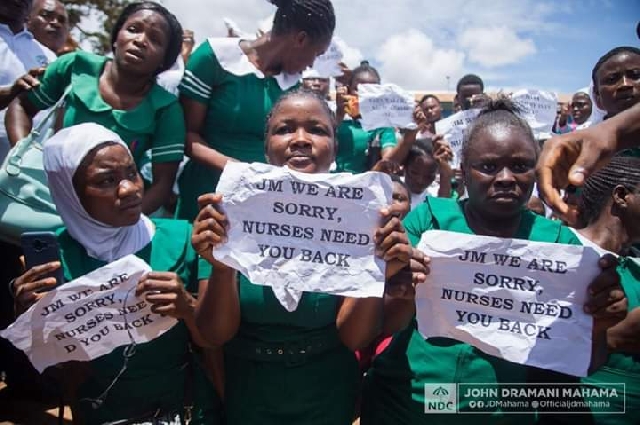 Management of the Nalerigu Nursing & Midwifery Training College, has commenced investigations into an incident where some supposed students on Friday, 30 August 2019 apologized to former President John Mahama for contributing to his defeat in the 2016 election.

According to Management, some of the students who took part in that action are not students of the school.

The students at a durbar organized for Mr. Mahama as part of his tour of the region held placards with inscriptions “JM we are sorry nurses need you back”.

They also mobbed the former president, knelt down and chanted “JM we’re sorry”.

Mr Mahama as President scrapped the nursing training allowance with the aim to migrate the trainee nurses onto the Students’ Loan Trust Fund instead.

The move caused disaffection for Mr Mahama as his opponents, Nana Akufo-Addo the then flagbearer of the New Patriotic Party (NPP), promised to restore the allowance if he won power in 2016.

Training nurses in state institutions comprising nurses and midwives are paid an allowance of four GHS400 per person.

The Management in a statement said it dissociates itself from the conduct of the student which took place at the palace of the Overlord of Mamprugu.

“There students were transported there without the knowledge and aprroval of the management. These students have benefitted fully from the students trainee allowance following its restoration by the government. Some of the individuals in the nursing trainee uniform are not known to be students of the institution. In the light of the foregoing, management wishes to state that the views and comments expressed by these individuals in nursing trainee uniform do not in anyway represent the views and policy orientations of the institution and that of the generality of the students.”