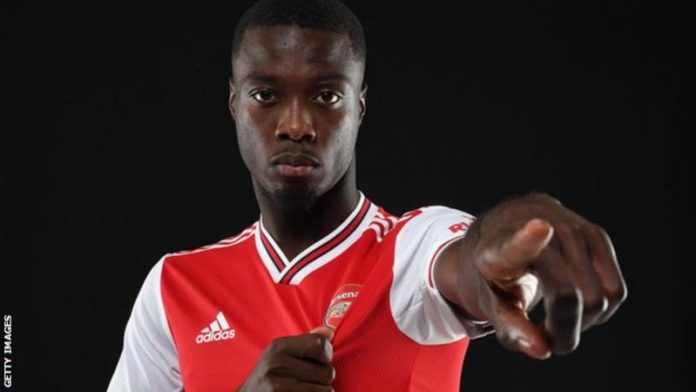 The 24-year-old has signed a five-year contract at Emirates Stadium after having a medical on Tuesday.

“Being here is very emotional,” said Pepe. “I have come a long way and struggled a lot and so signing for this great club is a big reward.”

Pepe added: “It was important to make the right decision and I am convinced that Arsenal is the right choice.”

During the 2018-19 Ligue 1 season, only Paris St-Germain’s Kylian Mbappe had more combined goals and assists than Pepe, who will wear the number 19 shirt for Arsenal.

“Nicolas is a highly rated and talented winger who was wanted by many of the top teams in Europe,” said Gunners boss Unai Emery.

“Signing a top-class winger has been one of our key objectives in this transfer window and I’m delighted he’s joining.

“He will add pace, power and creativity, with the aim of bringing more goals to our team.”

Pepe was the second player to be confirmed as leaving Lille on Thursday, with Portugal Under-21 forward Rafael Leao joining AC Milan earlier in the day for £27m.

It means Lille have now sold £135m worth of players during the current transfer window, with Thiago Mendes and Youssouf Kone joining Lyon for £19.8m and £8.1m respectively and Anwar El Ghazi making his loan deal at Aston Villa permanent in an £8.1m deal.

In comparison, they have spent £42.4m on bringing players in this summer, with Nigeria forward Victor Osimhen’s move from Belgian side RSC Charleroi their biggest expenditure at £10.8m.