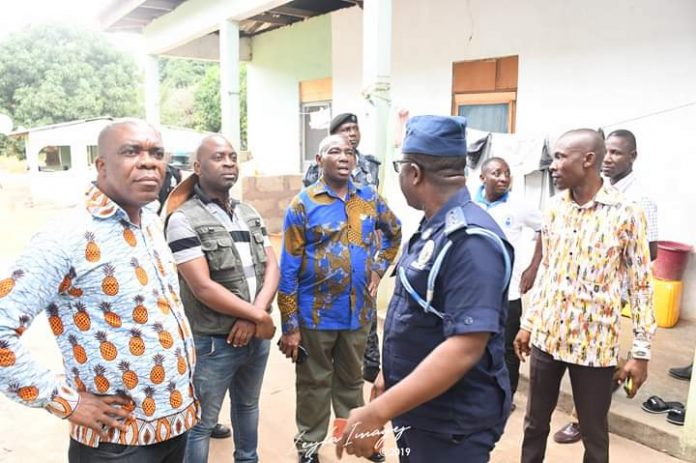 The Eastern Regional Minister, Eric Kwakye Darfuor, has stormed Somanya to inspect the 4,000 bags of Cocoa Fertilizers allegedly diverted from Samreboi in the Western Region to Somanya.

The Minister, accompanied on arrival by the Yilo Krobo Municipal Chief Executive-Ebenezer Tetteh Kuapulor and the District Police commander DSP Isaac Ostin on Wednesday, August 21,2019 visited the private House with number C8/2 in Asomdwekrom a suburb of Somanya where the seized fertilizers were being offloaded into.

This was after a closed-door meeting where the Municipal Security Council had briefed the Regional Minister on preliminary findings into the incident and the headway in unraveling the modus operandi of the accomplices some at large.

The Regional Minister commended the Police for the vigilance and swift interception of the items but charged them not to compromise their investigations because the matter is of high national interest and of interest to the President.

He admonished the general public to volunteer vital information to the police to help them thoroughly investigate the incident.

Meanwhile, efforts are underway to arrest one Kwaku Owusu a trailer driver accomplice who managed to escape sensing danger of being arrested.

On Monday, August 19, 2019, at about 5:30 am Police in Somanya led by the District Commander DSP Isaac Ostin upon tip-off impounded five articulated trucks conveying a total of 4,000 bags of Cocoa fertilizer suspected to have been diverted from Samreboi in the Western region to Somanya township.

The intercepted trucks belonging to one KITEKO transport company based in Accra were carrying 800 bags of fertilizer each.

One of the vehicles had already offloaded its consignment of fertilizers in a private house with House Number C8/2 at Asomdwekrom, a suburb of Somanya.

Patrick Nartey, 43, introduced himself to police as receiver of the items but failed to produce waybill when demanded by the Police.

The drivers had already told the police that they were part of 10 trucks loaded with fertilizer meant for cocoa farmers in Samreboi in the Western Region. These contradictions compelled the Police to speak to officials of KITEKO Transport.

The four of the drivers and the receiver of the items as well as the landlord of the house were arrested by Police to assist in investigation.