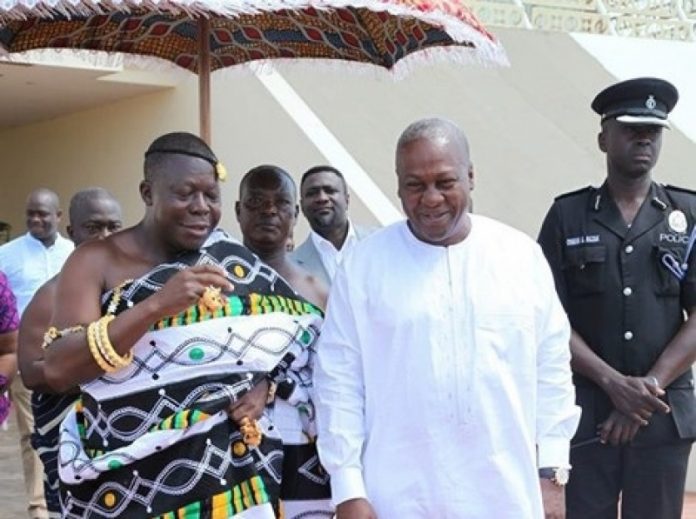 Former Chief of Staff Julius Debrah has rejected reports that former President John Dramani Mahama was advised by Otumfuo to accept defeat in the 2016 elections.

The Asantehene told a UN Conference recently that his palace had to intervene for the former President to handover power after the latter suffered defeat in the last general  elections.

“At the conclusion of the last presidential and parliamentary elections, the country [Ghana] stood on the edge of disaster. The UN representatives and the diplomatic community were aghast, alarmed that Ghana was going to slip down the slope of electoral violence.

“Fortunately, the moral authority of the palace was at hand. We were able to intervene to persuade the losing candidate to accept his fate and fly both candidates for a quiet encounter to pave the way for a handover,” said the Asantehene Otumfuo Osei Tutu II claimed.

But in a statement, the former Chief of Staff said Mr Mahama handed over power without anybody convincing him to do so.

“I state without equivocation that the decision to concede and congratulate Nana Akufo-Addo even before the official results were declared was taken by President Mahama himself without any persuasion from any quarter. On the day President Mahama willingly conceded defeat, he met with then Vice President Kwesi Bekoe Amissah- Arthur, NDC Chairman Kofi Portuphy, General Secretary of the NDC Johnson Asiedu Nketia, together with some high ranking members of the party and informed them of his decision to call and congratulate Nana Akufo-Addo.

“As Otumfuo himself has already stated publicly, under his auspices, there were three meetings held in Kumasi between President Mahama and then Candidate/President-Elect Nana Akufo-Addo during the period,” the statement said.

It added: “The first was prior to the December 07 election in which the two candidates promised to play fair and respect the will of the people. Indeed, President Mahama in a conversation with Nana Akufo-Addo said he hoped Nana was not going to tie down the nation in a court case again after the 2016 elections.

“The other two meetings took place after the official declaration of the results of the elections, and to re-emphasise, after President Mahama had publicly conceded and congratulated Nana Akufo-Addo. Those two meetings focused on matters arising out of the transition process.

“President Mahama made a commitment to the people of Ghana, never to be the one to subject them to the periods of unease, political instability and the doubts they experienced after the 2008 and 2012 elections. He remained true to that commitment and exemplified it after the 2016 elections”.