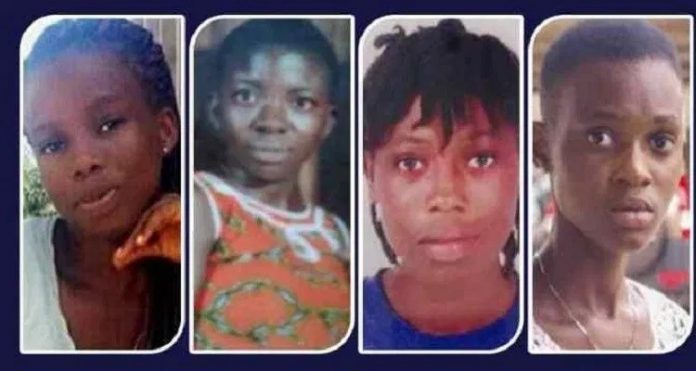 The family of Ruth Abakah one of the four missing Takoradi girls who have now been confirmed dead believes there’s a strong political hand somewhere that is ensuring that the brouhaha and agitations surrounding the issue of the girls does not die anytime soon.

The kidnap of the girls has for close to a year been the most topical issue discussed in the media with several people slamming the Ghana Police Service for their poor handling of the case since its inception to its conclusion.

Following the discovery of human remains from a septic tank in a house previously occupied by the Nigerian kidnap suspect in Kanswrodo that have been confirmed to be that of the kidnapped girls, there have been calls for the head of the CID boss after she earlier told the media “We know where the girls are,” at a news conference in Accra.

The Uncle of Ruth Abaka, Mr. Kwamena Baiden, speaking to Kasapa News questioned the interest of some people who he said are “crying more than the bereaved” and have purposed not to let sleeping dogs lie after the DNA test has confirmed that the remains are that of the missing girls.

While two out of the four families have rejected the DNA results and have called for foreign experts to run another test, Mr. Kwamena Baiden stated that his family wholeheartedly accepts the results and is not interested in litigating the matter.

“The way some people have been conducting themselves since this issue broke, I suspect there’s a political hand somewhere pushing this agenda to make sure this matter is never put to rest. We the family members are suffering from pain and the sort of noise being made out there is a great source of worry to us. The way people are saying the President has done this…has done that, I think some politics has been introduced into the matter. The more the issue is discussed in public the more our hearts ache. The woman who gave birth to this girl though is in great pain has accepted the outcome of the DNA test. But others elsewhere who call themselves, concern this, concern that are raising an objection. All these aggravate our pain as a family. I suspect that there’s a political hand somewhere influencing people to do what they are doing.”

The acting Inspector-General of Police, James Oppong Boanuh, on Monday confirmed that results of DNA tests conducted on some human parts exhumed in a house in Takoradi are that of the four missing girls.

A special police operation led to the discovery and exhumation of the bodies of the four missing Takoradi girls at Kasawrodo in the Western region.