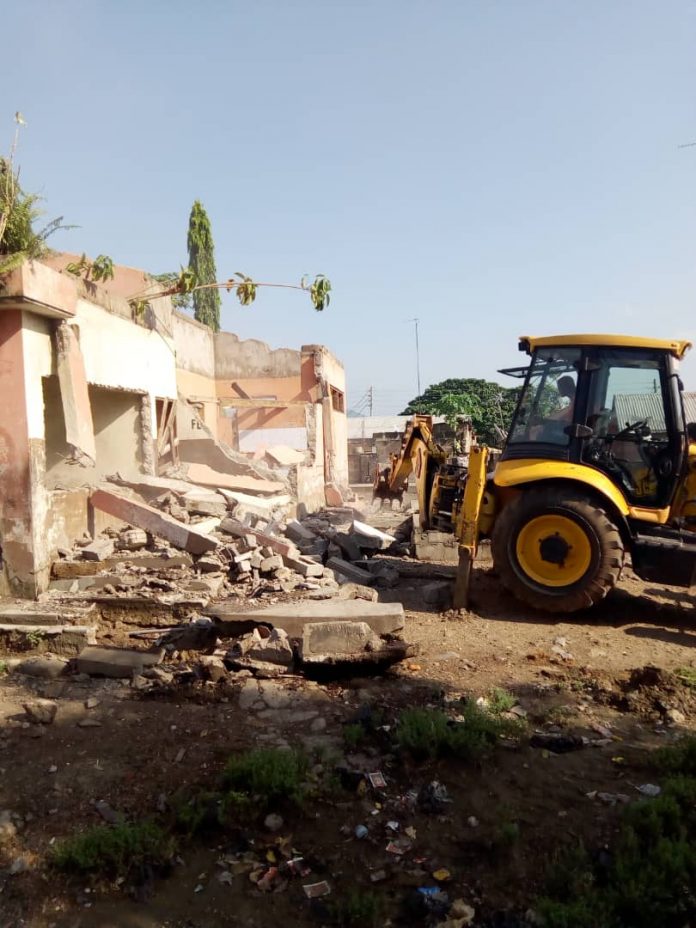 There is a looming cholera outbreak in parts of the Country as contractors have, en bloc, abandoned ongoing construction of automated modern toilet facility projects under a Public Private Partnership between Ghana First Company and the Government of Ghana.

Over 200 existing public toilet facilities in communities across the country were destroyed for the new ones.

The new toilet facilities which were expected to be completed within three months have not seen the light of day due to non payment of the contractors leaving the affected communities without places of convenience for several months forcing many residents to engage in open defecation .

The Government through the Local Government Ministry in 2018 signed a Memorandum of Understanding with Ghana First Company Limited [GhFCL], a waste Management firm owned by one Frank Akulley, an NPP stalwart to construct 20,000 units of modern automated toilet facilities across all Metropolitan, Municipal and Districts across the country at cost of $300,000,000 in partnership with a German firm, Thermodul System GmBH.

The Company subsequently opened tender for the construction of the first set of the facilities with a target of constructing 10,000 of its toilet facility model and put into operation by 2025.

Contractors were made to believe that funds were available in Ghana, and therefore a contractor just had to raise the structure, provide roofing and outside plastering to pave way for the automation.

At this level of completion, the employer together with the Bank after collaborative visit would release 60% of the contract sum to the contractor to complete the project.

Contractors were made to pay 2% upfront of the contract sum to Ghana first company limited before award letters and various sites were handed over to them.

However, the contractors, most of whom have reached 80% completion stage, claim they have not been paid despite several efforts forcing them to abandon sites.

Kasapa News visit to some affected Electoral areas such as Railways and Bula Spot in New Juaben North and South municipality in the Eastern Region revealed very harrowing situations of open defecation.

“They demolished the only toilet facility serving the entire electoral area with population of over 2000 so look around everywhere all these polythene bags are toilets. This bush is where everybody go to toilet so what is the sense in demolishing the toilet if you know it can’t be completed early for us.all these polythene bags you see around are wrap and throw it contains toilet, a resident lamented.

“Both men and women defecate near the railway. Sometimes you see the men looking at your private part.Very discomfort but what can you do.We all shit together at dawn and evening in the bush. They say we should go to Ogua which is far and there is long queue in the area because of the number ,” a lady resident who wants to be called Akose said.

Daniel Ahiale, Assembly Member for Railways Electoral Area,wants government’s intervention to ensure the completion of the project with alacrity to avert outbreak of diseases staring at the electoral area.

More worrying to the Assembly Member is the fact that market women who trade at the brisk Agartha market are forced to also engage in the open defecation notoriety.

” my people are struggling to get decent place of convenience since this impasse started so all that i want to say is that government must intervene ,abrogate the PPP agreement and get other private persons to complete the project fo Build Operate and Transfer bases so that residents get toilet facility to use.See, now i am even more worried that, market women at this vibrant market resort to the bus to defecate as well”.

The Spokesperson for the aggrieved First Ghana Contractors,Yaw Tawiah Dickson, said contractors are in a dilemma with a call on government to intervene for the projects to be completed to give access to the affected residents.

“Government intervening in this impasse is very critical to help in the achievement of proper sanitation because We don’t know when the company is going to pay us it has rather sued as Ghc5milion for defamation of Character for demanding payment of what is due us so we think it is just an effort to buy time but our worry is open defecation going on across all affected communities in nationwide “.

Already, it is estimated that close to Nineteen percent (19%) of Ghana’s total population practice open defection daily translating into one out of every five people practicing it.

Ghana reportedly loses an average of $79 million annually to open defecation and is classified among 34 countries with the highest open defecation rates of 15% and above .The stalemate between the contractors and Ghana First Company if not fixed will worsen the situation and effect effort to achieve the Sustainable Development Goal on Sanitation and Hygiene by 2030. – Kojo Ansah

52 households in Ga Mashie to get free toilets