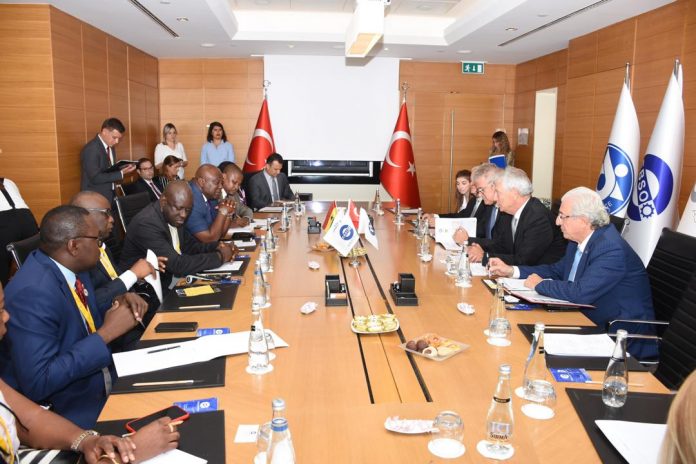 The deputy Minister of Trade & Industry in charge of trade, Hon. Carlos Ahenkorah, has appealed to entrepreneurs and industry giants in Turkey to look nowhere to invest their resources than Ghana, assuring that their investment will yield good returns.

Hon. Ahenkorah, who doubles at the Member of Parliament (MP) for Tema West, made this appeal when he called on the Izmir Chamber of Commerce, Chamber of Industry and the Exporters Association of Turkey at the ongoing 88th Izmir International Fair and Business Day in Izmir, Turkey.

The purpose of the call was to deepen the trade relationship that already exist between Ghana and these international trade bodies and call for a more collaborative working relationship to expand trade for mutual benefit.

The Izmir international fair and business day is organized every year for the past 88 years. The program gives an opportunity for invited countries to take advantage of an international trade platform created. This year has the people’s republic of china as a partner country.

Ghana is participating in the event following an invitation that was extended to it by the Izmir Chamber of Commerce.

Commenting further, Hon. Ahenkorah announced to these bodies the achievements being chalked by the Nana Addo-led government in the area of trade and industry.

He mentioned among many others the Tema Harbor expansion project which is almost completed, the tax and other attractive incentives such as the import wavers for the 1D1F flagship program and mentioned the recently launched Automotive Policy which he asked them to take advantage of.

He on the other hand, reminded of his appeal for them to also establish textile manufacturing industries in Ghana so that they can take advantage of the AGOA.

The three industry bodies on their part, called for a working trade agreement to be signed by the two countries in order to boost trade volumes and also remove other trade barriers.

They, however, promised to put this suggestion to the Minister of trade in Turkey. The group also called on Hon. Carlos to work out a sectorial industrial tour and B2B for them so that they can come to Ghana to meet potential partners.

Dep. Minister apologizes to Ablakwah after calling him a thief