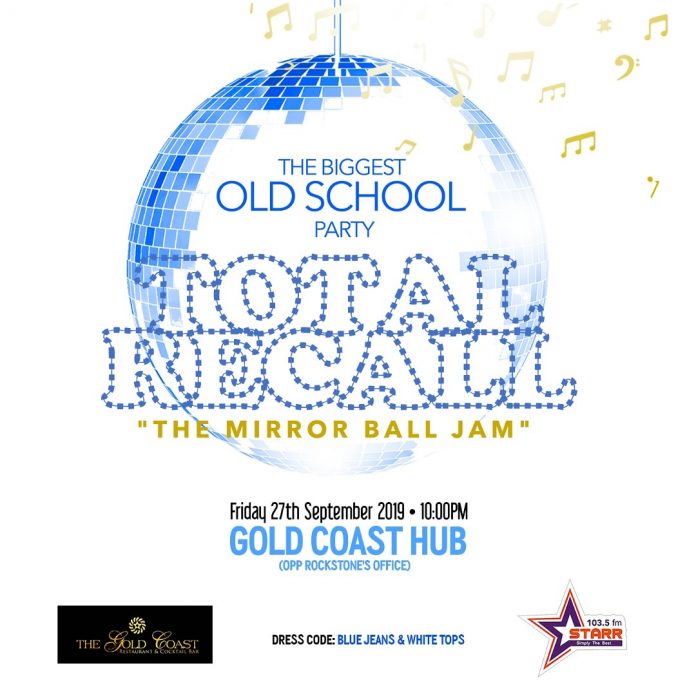 The Mirror Ball, undoubtedly one of the most patronized music, dance and networking events to have graced the entertainment scene in Ghana, is staging a return.

After some 5 years of consistent monthly sessions, the frequency of the event was reduced to an annual one in 2017, leaving patrons worried about its future.

The DJ Blow-led event is coming back on September 27.

“Da Authority” DJ Blow confirmed this in an interview.

“The answer to your question is yes, the biggest Old School Party is back, repackaged, rebranded and refreshed. It’s a Total Recall of the Mirror Ball Jam which begins at the new Gold Coast Hub, opposite Rockstone’s Office on the 27th September 2019.”

Looking back at what has been a long journey, he said:

“It’s been a long and gratifying journey entertaining the loyal lovers of the Old School” he said.

He admitted that the absence of a regular top-notch Old-School event had left a huge void on the entertainment scene and that there were times when he had to turn down invitations to avoid being accosted and accused of depriving patrons of their monthly dose of fun.

The all-new Mirror Ball (Total Recall) would be a bi-monthly event from 2020, but the dates for the rest of the year will be 26th September, 29th October, and Christmas Day, December 25.

The host of the Weekend Groove on Starr 103.5 FM says he’s grateful for the support the event has enjoyed so far.

“I would like to say a very big thank you to all the “Ballers” out there, together with all my partners on the journey so far for keeping the Groove going,…Impulse Night Club, Good Fellas, +233, Coconut Grove Hotel, Golden Tulip Hotel, La Palm Royal Beach Hotel, Soho, Karl Aubyn Multimedia, Tag Team, Global Media Alliance( YFM), EIB Network (Starr FM & GH One TV) and Joy FM, to mention just a few.”

William Quagraine, CEO of Gold Coast said he was looking forward to hosting the biggest Old School Party and was optimistic of the value that Gold Coast would add to the event.