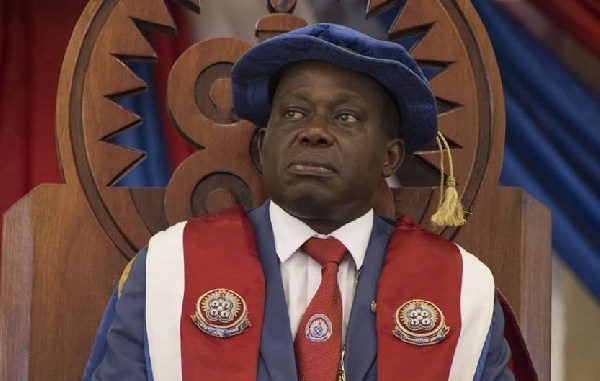 The Economic and Organized Crime Office (EOCO) has been petitioned to investigate the activities of the embattled Vice-Chancellor of the University of Education, Winneba (UEW), Rev. Fr. Prof. Afful Broni.

A petition, a copy of which is in the possession of Kasapafmonline.com alleged that the Vice-Chancellor approved the release of GHC5,700,00 from the university’s account which he supposedly alleged was honorarium for Staffs under the Institute of Distance and E-Learning, but allegedly retained quite a substantial amount but paid only a peanut to the beneficiaries.

The Acting Finance Officer of the University, Bruno Bajuase Chirani who made the request to EOCO and whose appointment was terminated by Rev. Fr. Afful Broni on 3rd September 2019, alleged that the VC and the Registrar Mr. Osei Barimah connived and made payment of GHC924,540.00 for the supply of furniture through Paa Badu Construction Ltd although there was no existing valid contract.

He claimed that the launded was paid through Paa Badu Construction Limited to Mr. John Darko, a member of the Governing Council to influence the outcome of an interview to appoint Mr. Francis Obeng as the new Finance Officer to cover their misappropriation of State funds. The same Lawyer, he added, the same Lawyer[Darko] was used to give a high mark to Mr. Osei Barimato enable him to qualify for the position of Registrar.

Mr. Bruno Bajuase Chirani, said a call for the interview report of the two appointees, will curiously expose how Mr. John Darko awarded marks to those who emerged.

Secondly, an amount in excess of GHC400,000 has been allegedly paid to a certain lawyer by name Paa Kwesi Abiadoo when the university has already employed the services of an external solicitor by name Peter Zwennes and a team of in-house lawyers who are being paid by the government every month. These payments to Paa Kwasi Abaidoo never went through a procurement process yet state funds were paid to the said lawyers as legal fees without any contract. In one of the memos the Registrar, Mr. Osei Barimah referred to an “oral agreement”.

Thirdly, huge sums of monies were allegedly paid to a certain carpenter by name Mr. Peter K. Boateng on the orders of the Vice-Chancellor and the Registrar.

The Auditor and Procurement officer of the University queried all the payment to Mr. Peter Boateng since there was no contract. The Boateng’s carpentry company was not even registered at the time the first payment was made to him and he had not registered with the Public Procurement Authority either.

EOCO recovers GH₵2.6m from crime proceeds to the State