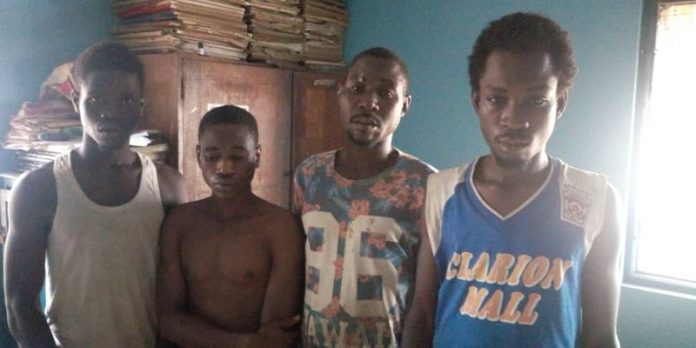 Two robbers and two fetish priests in Ejura in the Ashanti Region have been sentenced to 15 years imprisonment each for robbery and abetment of crime.

The Crime Officer of the Ejura Police Command ASP Emmanuel Kyei Sarpong in an interview with Ejura based Naagyei FM‘s Nana Ofori narrated that two of the convicts, Shaibu Zakari and Adam Ibrahim on the night of 13th September 2019, attacked and hit a mobile Money Vendor, Ibrahim Abdulai, 27, with a club while he was on his way home from work and robbed him of his bag containing mobile phones.

The victim is said to have raised an alarm for help following which some residents rushed to his aid and succeeded in apprehending the robbers.

The robbers were subsequently handed over to the police.

ASP Emmanuel Kyei Sarpong added that upon interrogation, the two robbers also mentioned the names of two fetish priests, Kwabena Ofori and Fuseini Isahaku as persons who give them spiritual protection to enable them successfully embark on their robbery activities, with whom they also share every booty they get.

The Police then proceeded to the abode of the fetish priests and effected their arrest.

The Presiding Judge in his judgment considered them since they were first-time offenders and sentenced each of them to 15 years imprisonment.