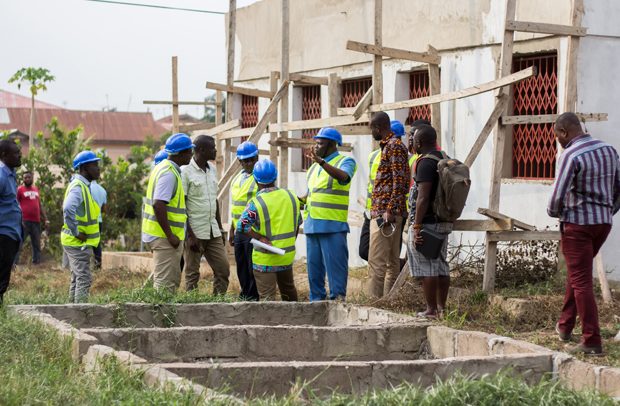 Over the past two weeks Ghana First Limited and contractors working on their ultra-modern toilet systems have been on each other’s throats over what the later says is the refusal of the former to pay them for work done.

The contractors claim, their checks show that the company has no money to pay them that’s why they chose the module they are working with now known as the “turn-key”.

The group in a letter written to the Ministry of Local Government and Rural Development claim their membership is about 200 and that they suspect the Ghana First Company is a fraudulent company hence the need for government to investigate them.

However the contractors are yet to produce a document countering the claims of Ghana First Limited which has produced such to show that they are being accused wrongly.

Per documents available, the contractors who have agreed to a ” turn-key project” to build over 200 ultramodern toilets across the country signed the contract without being coerced.

The payment schedule according to the contract is that, they will get paid once the contract is completed and handed over. Another provision says they may be paid 60% of the total sum after a joint inspection of the projects by Ghana First Limited, Financing agency and the contractors and not when they have done 60% of the contract.

The second provision is however the bone of contention as it seems the contractors did not understand that provision.

Per that provision, the employer(Ghana First Limited) reserves the right to pay 60% of the contract sum if satisfied with work done so far.

The contractors have been engaging media in the Eastern Region and this has landed them in trouble as Ghana First has sued them for 5 Million Cedis and also secured an interlocutory Injunction baring the contractors from making any comments on the subject.

This means that the contractors have been barred from speaking on the issue until the court says otherwise. They are also to file their defense in 8 days from 5th September when the defamation suit was filed by Ghana First.

Lawyers for Ghana First have declined comments on the case pending the decision by the court but reports say the contractors are still trying to secure the services of a lawyer to defend them in court.

Documents available indicates that the financing agency wants to use the facilities to be constructed as collateral for the funds to Ghana First Limited. This means that once the project is done, contractors can put in their certificates to be processed for payment which will be within three months of project completion.

This the contractors have been made aware of and have agreed to work on.

Contrary to claims that they have not received any money from Ghana First Limited, documents reveal that some contractors have received over fifty thousand cedis to support in their work.

This is notwithstanding the fact that some contractors have breached the specifications of the contracts. Some have not used the specified blocks to do their work.

In one letter to ministry of local government and rural development, the contractors claim they are 200 while in their press statement they say they are 130 meanwhile documents at Ghana First Limited show they are 120.
So the question remains how contractors are doing the work?

DCEs must be taught how to raise money for the Assemblies – O. B. Amoah