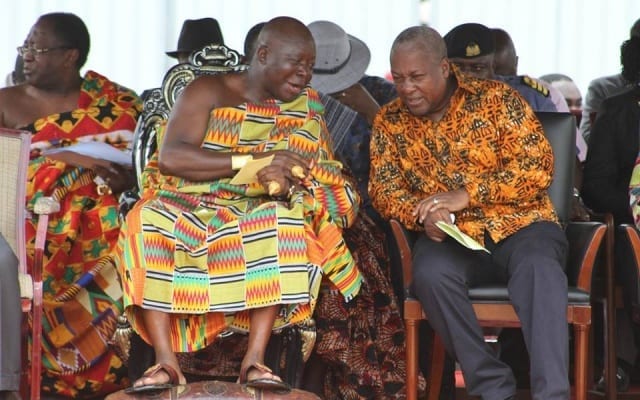 Former President John Mahama has said he has huge respect for the Asantehene Otumfuo Osei Osei Tutu II and will not allow the recent misunderstanding over events of the 2016 elections to mar their good relationship.

According to him, the statement by his former Chief of Staff over issues relating to the 2016 elections was intended to clarify any misinterpretation following Otumfuo’s speech at the UN.

The King had said he persuaded the former President to concede defeat after he woefully lost the 2016 elections by over one million votes to then-candidate Akufo-Addo.

But this claim was immediately fiercely dismissed by the office of the former President.

In a Facebook post on the issue, Mr. Mahama said upon Otumfuo’s return to Ghana, he will take steps to resolve the impasse.

“The recent statement from my office was meant to shed more light on the events surrounding the 2016 poll and not to disparage Otumfuo’s efforts at promoting national peace and unity. I, therefore, find the language and commentary in the ensuing public discourse very disturbing.

“Clearly Mr. Julius Debrah’s statement was intended to simply clarify that I never had the slightest intention of seeking to hang on to power unconstitutionally, as some media houses sought to infer from Otumfuo’s speech at the UN.

“I have profound respect for Otumfuo and Asanteman and will not allow this issue to mar our long-standing cordial relationship. On Otumfuo’s return home, we will take the necessary steps to bring closure to this matter. In the meantime, I urge the general public and party members not to be baited into non-constructive flogging of this issue,” he said.