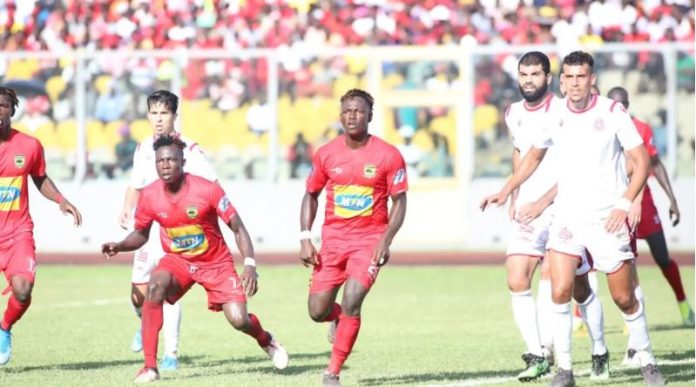 Kumasi Asante Kotoko recorded their first-ever win against Tunisian side Etoile du Sahel on Sunday beating them 2-0 in their Total CAF Champions League Round of 16 first-leg clash on Sunday in Kumasi.

The Porcupine Warriors Kotoko who hade never recorded a win in their four previous meetings against Etoile, started on the front foot and grabbed the opening goal as early as the fifth minute through Augustine Okrah from a well taken free-kick at the edge of the penalty are.

Etoile quickly regrouped and managed a couple of attacks into the half of the hosts but the defense was up to it.

New signing Richard Arthur added the second goal in the 55th minute just when the visitors were asserting themselves on the game.

The fight for at least an away goal lingered in the minds of Etoile as they pushed more men forward but Kotoko managed to hold on till the final whistle to record.

Two-time winners, Kotoko are eyeing an appearance at the group stage of the premier continental club championship since 2006., and must cough out a favourable result in the reverse in a fortnight to realise that dream.