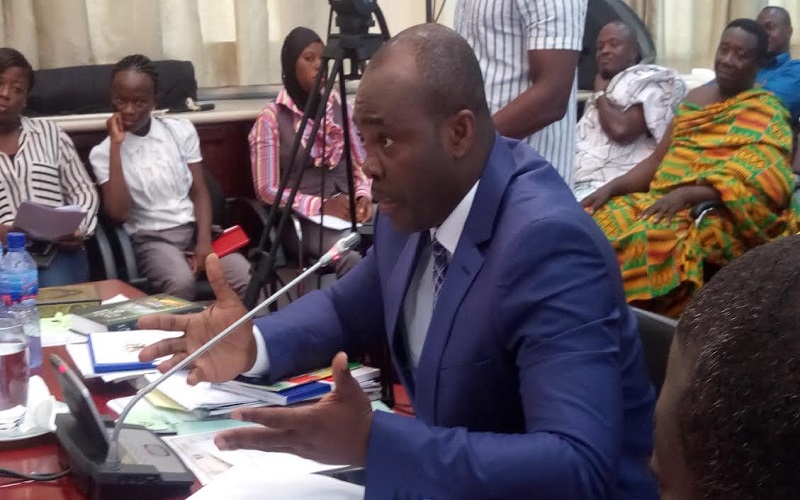 The Minority in parliament is demanding full disclosure from government about the circumstances that led to the termination of the appointment of CEO of the national Youth Authority and his two deputies.

In a letter signed by the Minister of Youth and Sports, outrightly dismissed the three officials of the public entity without any stated reasons for the action.

A reaction from one of the two Deputies, Richard Obeng following the termination of the appointment of the trio suggested the allegations of some procurement breaches regarding a programme for the training of the youth in the repair of streetlights.

However Ranking Member on the Committee of Youth, sports and culture of Parliament, Kobena Mensah Woyome in a press Statement said the Public deserves to know from government why the three officials were sacked.

“We want to assure the good people of Ghana that we are determined to get to the bottom of this scandal at the NYA and will therefore invite the Minister to house when Parliament resumes in October to answer further questions on this issue.”

STATEMENT FROM THE RANKING MEMBER OF YOUTH, SPORTS AND CULTURE COMMITTEE OF PARLIAMENT ON HAPPENINGS AT THE NYA.

It has come to the attention of the Minority NDC in Parliament that the National Youth Authority has been embroiled in some procurement corruption that may have led to the sacking of its Chief Executive and two Deputy C.E.O’s.

Considering the importance of the NYA as a vehicle for the development of the Youth of this Country, we the Minority accord this recent happenings with all the seriousness it deserves.

Our own preliminary investigations reveals that the procurement of the services of Prefos limited to train some youth in street lights repairs did not go through the necessary due processes, including the required procurement procedures for such transactions before payments were made to Prefos.

Considering the facts as we have been briefed, we have the following questions for the Minister for Youth and Sports who is the head of the oversight Ministry of the NYA.

Earlier this year, the Minister was at the Committee (Youth, Sports and Culture), to defend the budget of the Ministry, the training program for the repair of streets lights featured strongly and was defended heavily by the Minister.

As the Minister who appeared before the Committee of Parliament to defend this transaction, what did he do to ensure that the transaction went through the necessary due processes?

This clearly shows how weak institutional supervision is under the Ministry of Sports.

Section 20 of the NYA Act, ACT 939, 2016, clearly indicates, that the Board of NYA shall submit to the Minister of Youth and Sports any report the Minister may request in writing, including audit reports and that shows the level of the oversight responsibility the Act puts on the Minister and so the Minister cannot absolve himself off any blame from this matter and turn around to exercise punitive powers when he failed to effectively exercise his oversight powers over the Authority.

A statement by a Deputy C.E.O of NYA (Mr. Richard Joojo Obeng) indicates that as the officer in charge of approving payment vouchers for the authority, he did not approve the payment of the GHC1.8million paid to the Prefos.

So who usurped the powers of the approving officer and authorised the payment?

This also to a large extent confirms the regrettable culture of corruption , lack of respect for due processes and the financial malpractices that has engulfed almost every institution under this Government.

Considering the fact the Minister has written to out rightly sack the C.E.O and the Deputy C.E.O’s, it means the Ministry has done some investigations and have ascertained certain facts surrounding the issues at the NYA.

The letter dismissing these officers also did NOT also state exactly why they are being dismissed, thereby leaving the general Public in the loop.

This looks more like an afterthought by a Minister who could probably be sleeping on his job as he could not even tell which position Mr. Asigri occupies at the NYA.

We are therefore calling on the Minister to make public whatever report that informed the decision to sack these officers so that Ghanaians and the media can appreciate the issues on the current happenings at the NYA.

As a party that is youth centred and has always advocated for Policies that focuses on improving the quality of life of young people and also creating limitless opportunities for the young people of this Country, we are heartbroken by the current perception that National Youth Authority has now become a conduit and a hub of corruption.

We want to assure the good people of Ghana that we are determined to get to the bottom of this scandal at the NYA and will therefore invite the Minister to house when Parliament resumes in October to answer further questions on this issue.