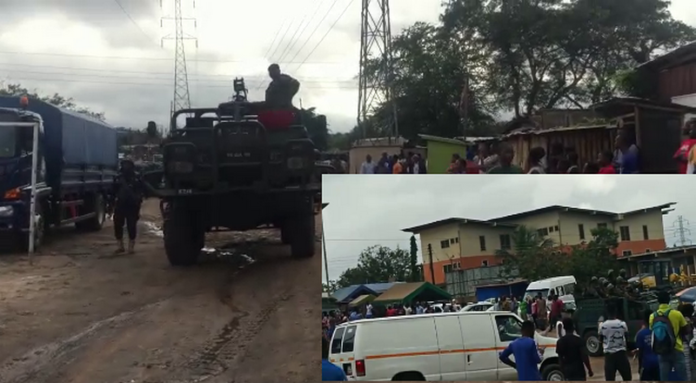 Security Analyst Adam Bonaa has described Thursday’s dawn swoop by a joint Police, Military team at Gomoa Buduburam during which a total of 141 suspects including 15 females were arrested is an exercise in futility.

In a press statement, the police explained that the operation was part of efforts to ensure total security in the country.

It said the police and its security counterparts have intensified the war against crime by taking the “fight to the doorsteps of criminals. The preventive measures employed shall include cordon and search, swoops, intelligence-led operations among others.”

The police statement issued by the Public Affairs Directorate said “a total of 141 suspects including 15 females were rounded up during the operation and were all brought to the Police National Headquarters for screening. Those found culpable shall be taken through the legal process.”

But commenting on the security operation, Adam Bonaa told sit-in host Akwasi Nsiah on Anopa Kasapa on Kasapa FM that such measures will fail to rid Buduburam of criminals as there are no police officers constantly stationed or patrolling in the town.

“It is a Cos 90 work, you wait and see whether in the next one month we wouldn’t record crimes going up again because you see you have not left officers there who are going to be stationed there permanently. Why are we not recording increasing crime rate around East Legon, Cantonment etcetera, Police-civilian ratio is closer to the national average but when you go to this area crime rate is high, the fundamentals have not been fixed. About 600 police, military team moved in and all of them have been withdrawn, why can’t we keep them there provide them with accommodation, make sure these security officers are patrolling day and night and then let’s talk about this issue after one month. I’ll tell you that this is going to reduce crime by about 90 percent but the swoop on Thursday is almost like a cos 90 work. I’m being very honest with you, we should have permanent solutions to our problems.”