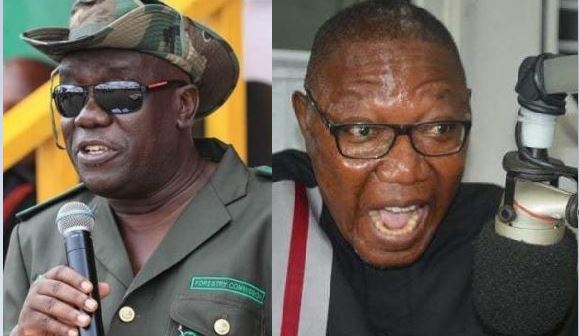 Builsa South Member of Parliament, Clement Apaak has challenged the Chief Executive Officer of the Forestry Commission, Kwadwo Owusu Afriyie to cause his arrest and prosecution, if he and the government indeed have a dossier that exposes his complicity in the illegal rosewood trade.

“I’m challenging him and his government, Crime has no time limit and we all know that the ban on harvesting and export of rosewood has been in force for a long time. And so if Sir John has evidence that me, Dr. Clement Abas Apaak, the Member of parliament for Builsa South, who’s also the lead advocate against this illegality has ever been involved in rosewood trade, I am expecting to be arrested and prosecuted,” Apaak told sit-in host Akwasi Nsiah on Anopa Kasapa on Kasapa 102.5 Fm.

The Chief Executive Officer of the Forestry Commission has rejected a report citing the Commission for bribery and corruption in relation to the illegal Rosewood trade.

Kwadwo Owusu Afriyie on Wednesday said the allegations against him and officials of the Commission by the Environmental Investigative Agency (EIA) are false insisting all other investigations into the scandal are bogus.

In a twist to the development, the Forestry Commission Boss, Sir John has allegedly drifted Dr. Apaak into the illegal trade accusing him of being involved in the business.

“They have now started a crusade to draw me in, Dr. Apaak noted, adding “they cannot use this communist Imperial tactics to think that they can intimidate me or cause me to cow down so that I can turn the other way round for the pillaging to continue.”

He added:” In order to show that I’m not a man who misses my word, I have requested the tapes and also put my Lawyers on standby. Sir John must be prepared to go to a competent court of jurisdiction to provide evidence to substantiate the allegations that he’s making against me.”