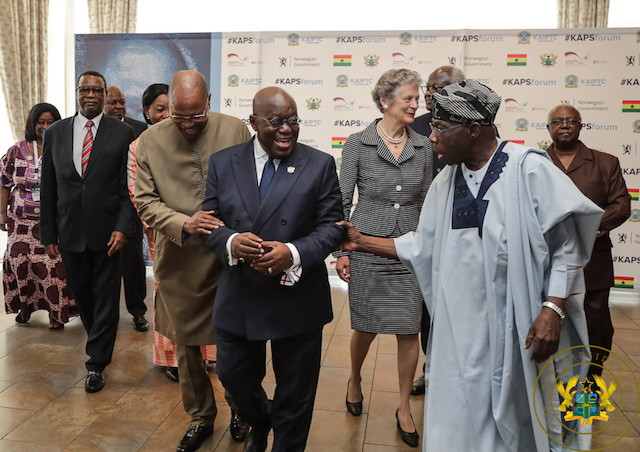 President Nana Addo Dankwa Akufo-Addo says Ghana has signed and ratified a number of international instruments in aid of the global call to action against terrorism and violent extremism.

According to President Akufo-Addo, the contents of these instruments have also served as guides in the formulation of our Counter Terrorism Policy, which seeks to prevent acts of terrorism in the country.

The President continued, “Ghana has adopted a well-coordinated Inter Agency Approach, which encourages the timely sharing of information and intelligence, operational coordination and joint strategy formulation, and has proved essential towards ensuring the efficient execution of the country’s Counter Terrorism Policy.”

President Akufo-Addo made this known on Wednesday, 4th September 2019, when he delivered a speech at the Kofi Annan Peace and Security Forum, on the theme “Peace Operations in the Context of Violent Extremism in Africa.”

West Africa, in recent years, has become a hotbed of terrorist and extremist activities, as a result of greater activism of groups operating in the North East of Nigeria, the Lake Chad Basin, Mali and the Greater Sahel.

Endemic poverty and widespread disillusionment amongst youth in Africa, the President explained, are not only providing fertile breeding grounds for those who want to cross the Sahara Desert on foot, and the Mediterranean Sea in rickety boats, in the hope of finding a better future in Europe, but also for a new generation of terrorists and violent extremists.

“Despite being a beacon of peace, stability and democracy in a region that is plagued by the activities of terrorist and extremist groups, Ghana must know she cannot be immune from terror attacks,” he added.

The activities of terrorist and extremist groups in Ghana, for now, the President said, take the form mainly of fundraising activities by allegedly charitable organisations, which divert these funds to support extremist activities around the world.

To combat the menace, Ghana, the President reiterated, continues to establish closer ties and good working relations with security organisations in West Africa, in a bid to improve the collaborative framework within the region.

“Ghana is a regular participant in the meetings of the Committee of Intelligence and Security Services of Africa (C.I.S.S.A.), an AU body.  The quintet meetings, known as the Accra Initiative, involving security and intelligence heads from Ghana and her neighbouring countries, namely Cote d’Ivoire, Burkina Faso, Togo and Benin, are also held frequently to review and formulate joint strategies towards combating shared threats on terrorism and violent extremism,” he added.

The President was happy that the leaders of Mauritania, Mali, Niger, Chad and Burkina Faso, known as the G5 du Sahel, have launched a multinational force to fight armed groups in the Sahel region, with one battalion each from the five countries.

“The co-ordination of activities between the armed forces and the intelligence agencies of our respective countries is absolutely essential to a successful battle against terrorism,” he noted.

President Akufo-Addo urged others to emulate the example of France, Germany and other members of the European Union in providing assistance to, and, thereby, enhancing the capacity of the G5 du Sahel.

“Already, these poor countries are having to spend unacceptably high proportions of their national budgets on defence and security matters, to the obvious detriment of necessary expenditures on social concerns. Their call for global solidarity must not go unheeded. The UN Security Council, responsible for the maintenance of international peace and security, must step up to the plate,” the President added.