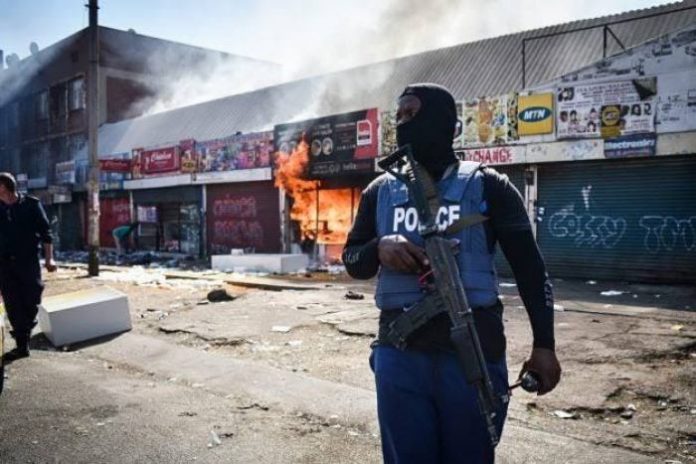 Black natives in South Africa have for the past week taken to looting and burning of shops owned by other nationals in Pretoria and Johannesburg.

South African police have arrested dozens of the protestors who claim immigrants, especially Nigerians are taking over their jobs and selling illicit drugs.

Speaking on the Ultimate Breakfast Show, a South Africa-based Ghanaian Reverend Minister Donald Agyapong narrated how bad the situation is and how Ghanaians are coping.

“I am in Durban watching the news on TV and calling our people in the place and what is happening in the videos is true and it baffles me why there is no police stopping them. I can say boldly that no one cares. Most of the Ghanaians that I know and I have been calling are in hiding because they are just burning peoples sources of livelihood and you cannot come out,” Rev. Agyapong told host of the breakfast show Julius Caesar Anadem.

Meanwhile, a security analyst based in Sudan, Prosper Nii Addo, is calling for more robust engagements between heads of states of African countries and South African authorities.

He believes until the South African Government is forced to commit to ending the xenophobic attacks, such violent attacks will continue to recur.

“We have our foreign missions in our various countries and I feel the engagements have to be more robust. At this stage, let’s get the government of South Africa to commit to addressing the problem and getting the security to address the issue,” he stressed.

South African police have confirmed that at least two people have died with over 100 people arrested for crimes including malicious damage to property, attempted murder, theft and housebreaking.

Coronavirus: “Don’t wait for us to die” – Ghanaian students in China to Govt