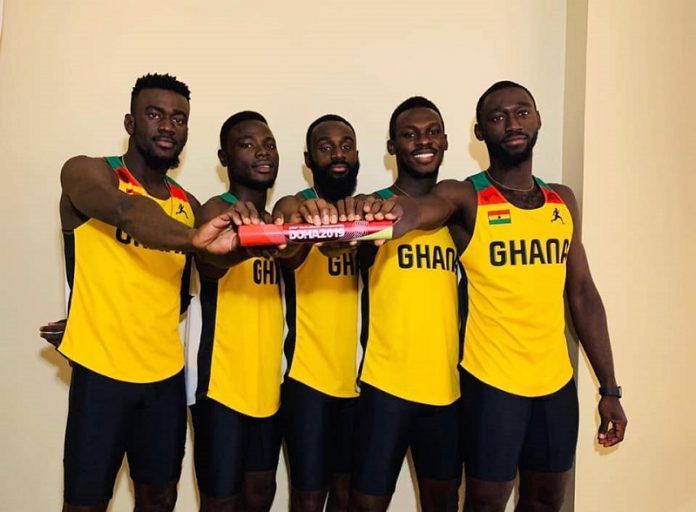 When Ghana’s men’s 4x100m relay team takes to the track on Friday, 4th October, 2019 at the IAAF World Championships (WC) Doha 2019, it will be the first time in 8 years that the relay team will be competing at the world’s show piece event.

Back in 2011, sprint legend Aziz Zakari anchored the team to seal a last minute qualification to the WC at the famous rLG Ghana Grand Prix held at the Baba Yara stadium in Kumasi.

The team, which was made up of Emmanuel Appiah-Kubi, Tim Abeyie, Ashad Agyapong and Aziz Zakari, beat a quality field of international teams to achieve the feat, clocking 38.92 secs.

It was a memorable occasion to see the team race on home soil in front of a local audience for the first time in several years.

But at the World Championships in Daegu 2011, they came up short of the required competitive levels, clocking 39.17 secs to exit the semi finals.

US-based sprinter Ashhad Agyapong was quick to point out that poor preparations was to blame for the performance, saying that they needed more time together to gel and also develop into a world class team. They were ranked 15th in the overall rankings at Daegu 2011.

From then onwards, the men’s relay team has undergone several changes with different athletes coming into the fray at different competitions.

Tim Abeyie, the only remnant from the Daegu 2011 team, anchored the team to clock the fastest ever time by a Ghanaian team at an African Athletics Championship after winning a silver medal in a time of 39.28 secs at the 2014 African Championships in Marrakech, Morocco.

The relatively inexperienced team, which was made up of three debutants, including a 400m runner, gave Nigeria a run for their money before claiming silver in a pulsating race.
400m runner Daniel Gyasi gave Ghana a good start before Solomon Afful ran a good back straight, handing over to Emmanuel Dasor who ran a good curveand gave the baton to Tim Abeyie. But a strong finish by Nigeria’s Mark Jelks denied Team Ghana the ultimate prize.

The quartet of Daniel Gyasi, Solomon Afful, Emmanuel Dasor and Tim Abeyie eclipsed the previous performance by the national relay team at the 2012 African Athletics Championship in Benin, where Ghana ran 39.40 secs to win a bronze medal.

There was yet one more bronze medal at the All African Games in 2015 this time by the quartet of Daniel Gyasi, Solomon Afful, Emmanuel Dasor and Shepherd Agbeko who finished with39.71 secs. Agbeko was the new member in the team replacing Tim Abeyie.

But an all locally based sprint quartet could not qualify for the final of the men’s 4x100m relay at the 2016 African Championships in Durban, South Africa. The team was made up of Martin Owusu-Antwi, Desmond Aryee, Shadrack Opoku Agyeman and Emmanuel Yeboah.

This was a largely experimental team of locally based sprinters who were being rewarded for their good works on the domestic circuit after each one of them hadrecorded10.4 and 10.5 consistently in a very competitive season which saw the Ghana Athletics Association organising a record 10 events.

Curiously, about a week after the Durban Championships, Martin Owusu-Antwi joined up with theKwame Nkrumah University of Science and Technology (KNUST)’s track team at the African University Games (FASU) at Johannesburg. This time, he won the 200m final and was part of the gold medal winning 4x100m relay team which also had a little known Joseph Paul Amoah as a member.

In the years that followed after, Ghana did not present men’s 4x100m relay teams at the World Relays and the 2018 African Championships. The attention was focused on the women’s relay who had clocked an amazing 42.67 secs to qualify for the 2016 Rio Olympic Games.

There was however some strong showing by the nation’s sprinters around the world. Most notable among them was Sean Safo-Antwi, who made the headlines for qualifying for the final of the men’s 60m at the World Indoors.

At the March 2018 IAAF World Indoors in Birmingham, Sean became the second Ghanaian to reach a final of a World Indoor event.

Ghana’s last world Indoor 60m finalist,John Myles-Mills, who won silver with 6.59 secs in 1989. Interestingly, Sean clocked 6.59s to qualify for the final of the men’s 60m final at the IAAF World Indoors and secured 7th place in the final with 6.60secs.

Sean’s bust of speed from the blocks serves as an important tool to start off the team’s 4x100m quest.

The emergence of Joseph Paul Amoah in the 2019 season further strengthened the team. He broke the national 200m record with 20.08s(NR) and topped it with the fastest 100m time by a Ghanaian in about a decade when he produced a personal best 10.01 secs.

Together with his former KNUST and Coppin State University teammate Martin Owusu-Antwi, Ghana had a fulcrum upon which to build upon a good relay team again.

Meanwhile, on the local scene another piece of the jigsaw was fast developing in the shape of University of Ghana sprinter Benjamin Kwaku Azamati.

A level 300 Bachelor of Science in Marine Science student, Azamati was rough diamond who came through to the fore under the tutelage of University of Ghana athletics coach Elorm Amenakpor.

His personal best 10.32 secs achieved at the World University Games (FISU) at Napoli set him on the right course for the African Games in Morocco.

At Rabat 2019, the team had its first competitive event in the 4x100m relay semi final, clocking an impressive 38.80 secs. The performance ranked them as one of the best relay teams ever in Ghana and much faster than the 2011 feat by Aziz Zakari and team but slower than the national record of 38.12 secs.

This is how the Ghana Athletics Association’s Facebook handed described the race:

“Sean Safo-Antwi headed off the race with a blazing start and handed off to Benjamin Azamati in a smooth exchange. Azamati kept up the steam before handing off to Martin Owusu-Antwi, who didn’t let up and handed off to Joseph Paul Amoah way ahead of the pack. Joe was able to ease into a relaxed finish, saving some heat for the final.”

The performance by the boys got the nation excited on the streets of Ghana with many sports enthusiasts jumping into a frenzy. Many spoke about the good old days when Ghana used to be a giant in the sprints on the African continent.

Sure enough, the boys returned the following day and silenced a Nigerian team boasting of the world’s second fastest man this year, Divine Oduduru, to take first place in Rabat. Ace sports journalist Karl Tufuoh was particularly impressed with the performance of youngster Benjamin Azamati who ran a great back-straight despite being paired against Divine Oduduru after Sean had given the team another good start. The teams were almost at par after the curve and it took some extra drive from Joseph Paul Amoah to bring it home in a time of 38.30 secs.

The surprise gold medal at Rabat evoked a strong national sense of pride in Ghana. The achievement came 16-years after Ghana won gold at the then All African Games in Abuja 2003.

At Doha 2019, Ghana is ranked 13thamong an international array of teams going into the competition. Great Britain have ran the world lead 37.60 secs, while Turkey and the Netherlands share second and third with 37.98 secs and 37.99 secs respectively. They are followed by Yokohama World Relay gold medalists Brazil with 38.01 secs, USA with 38.07s while Jamaica are further down in 10th place with 38.35 secs.

All other factors being constant, it appears Ghana’s quartet will necessarily have to dip below 38 seconds to stand a chance of medaling at the Championships.

A former national sprinter and recent coach of the team at the African Games in Morocco, Dr. Christian Nsiah believes 37 seconds is possible.

“Sub 38 like 37 something is achievable for the men’s relay team. You see, we have a group of guys that enjoys to run with each other so I believe they have the potential to be great,” he said.

Adding, “I believe if our relay teams trust in themselves and each other and have a belief that they can do it, they will be successful. I love these guys and I wish them well at the world championships.”

Meanwhile, the team has been hard at work in the Doha heat, rehearsing and strategising for the big day. Head coach of the team Leo Myles-Mills said it is their aim to qualify for the final of the event and secure qualification to Tokyo 2020.

“It’s ALL high hopes for the athletes. For some of them, it’s their first time on such a huge world scene. They’ve done their best, which merits them to be here. They shouldn’t lose focus and remember why they are here. These guys are great and they are here to rub shoulders and have fun with some of the world’s greatest athletes. But all in all, I know they will do their best and that their performance would carry them to the 2020 Olympics.”

One thing is for certain, this is going to be a tough competition and a tough test for Ghana’s team. But one thing is for sure, they will give it their best shot at Doha 2019. I believe they will most probable bring down the national 4x100m record if they get the chance to run the final. The sky can’t be the limit for Team Athletics!