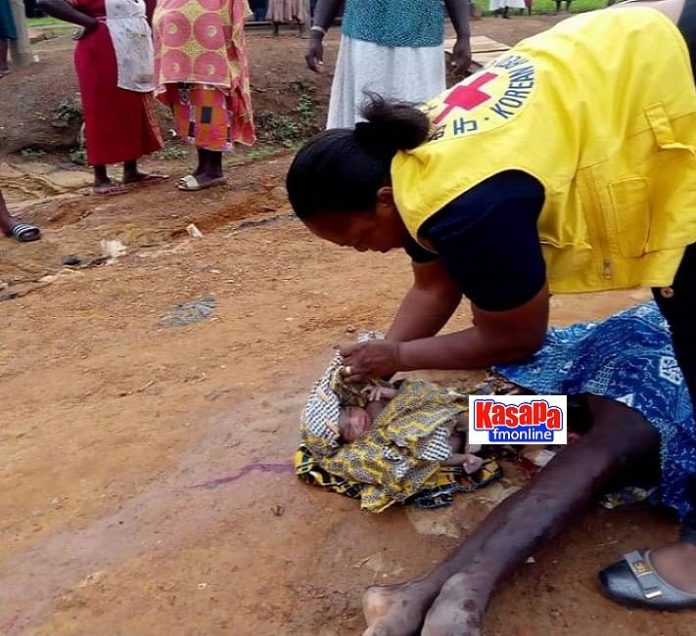 Two pregnant women have been delivered safely at roadside in two separate incidents in Adawso in the Eastern Region and Dambai in Oti Region.

According to the Community Health worker Emmanuel Addipa -Adipoe, the Pregnant woman left Atibie Hospital returning home due to Financial challenges but labour set in while at the shore of the Afram River waiting to cross with the Ferry.

“The news is that with the help of the midwife in the picture we have just helped deliver a baby born to a diabetic mother who absconded from Atibie government hospital on account of financial constraints. As you can see, the baby is big, so I am monitoring closely to prevent neonatal hypoglycaemia. I have set up the only fluid I have available…Dextrose and I will cause mother to start breastfeeding”. The Nurse explained.

Similarly on Monday September 30,2019  two Public Health Nurse- Rita Wurapa and Rose Ayivor while on their routine monitoring with thz District Director of Health Services at Dambai in Oti Region came across pregnant woman in labour in the Middle of the road.

The Pregnant woman was being rushed to the Dambai Health Center on a motorbike by the husband due to poor road from the village but unfortunately there was a spontaneous delivery labour on their way.

The team stopped and help deliver the pregnant woman safely and rushed her to the Dambai Health Center. 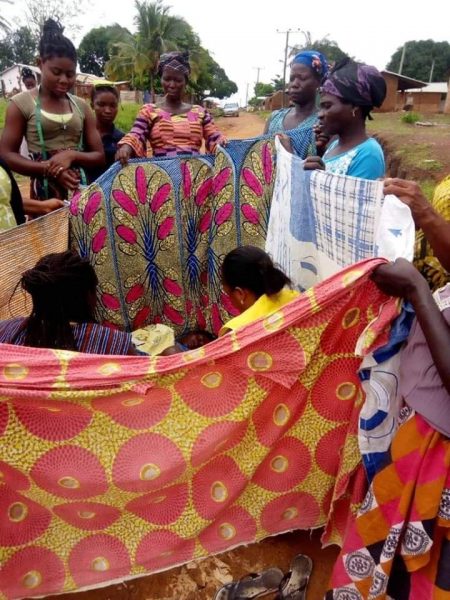 Rose Ayivor told Kasapa News ” myself and the Director and the Public health Nurse, we got down from the car, we asked of a cloth to wrap the baby, we asked of a polythene bag to put on our hand and thread just to tied the cord but we were not having a blade or anything like that so we quickly called the midwife at the health center so the midwife came with the necessary instruments for the cord clamp”.

The high Maternal Mortality rate for instance in the Eastern Region remains a bane Ghana Health Service is grappling to significantly minimize .

A total of 132 Pregnant Women died in the region in 2018 according to the Ghana Health Service.

Although, the figure is a reduction from 180 maternal deaths recorded during the previous year,it is still on the high side and unacceptable.

The clinical causes of maternal deaths in the region have been attributed to Hemorrhage,eclampsia/Hypertension disease in Pregnancy ,Amniotic fluid, unsafe abortion. A clinical audit in previous years also faulted human errors on the part of Midwives and Doctors for some of the deaths which were preventable if due diligents were done .

Having said this ,the lack of health infrastructure in most rural communities in the region cannot be overlooked as a contributory factor likewise the lack of logistics in most health facilities in the peripheral .Community Health Provision Services (CHPS) and Health Centers are the Health facilities expected to provide primary healthcare to the people in the rural areas in Particular are inadequate whereas most of its conditions are nothing to write home about.

The inadequate or no safe motherhood program staff-Midwives in these facilities are also glaring challenge compelling Pregnant women to travel long distance mostly on Motorbikes only to access antenatal services.This discourages many pregnant women in such remote areas from attending ANC.

Skilled birth attendance continue to stagger bellow the target of 65 % set by GHS due to inadequate professional midwives in the region largely as a result of government inability to employ midwives and Nurses between 2014 to 2017 inspite of the high attrition.

According to statistics by the Regional Health Directorate only 49% of deliveries were done by qualified midwives in 2017 which increased marginally to 51.4% in 2018.Though some pregnant women out of superstition decide to give birth in prayer camps ,at traditional birth attendant facilities and even Shrines for various religious and spiritual beliefs mostly influenced by Prophets and Spiritualist ,a conundrum the Ghana Health Service trying draw strategic plan to address.

In a recent presentation by Miss Elen Darkoa Asare -Deputy Director of Nursing Services at the Public Health Department of the Regional Health Directorate outlined that “poor referral system, inadequate specialists in hospital ,lack/Poor supervision by some managers,poor emergency preparedness and responsiveness, frequent shortage of blood in the blood bank,and lack of capacity and logistics to swiftly identify high risk cases in rural areas” as some of the challenges debilitating against zeal to reduce the high maternal rate to the barest minimum .

Speaking to a pregnant woman in Akotoklo -Gua -farming community in the Upper Manya Krobo District of the Eastern Region ,she catalogued deeper glimpse into the complex trajectory of how the lack of basic social ameneties such as roads, Water and none proximity of health facilities has on maternal health.

“We don’t have good water to drink, our road is terrible no car come here, pregnant women had to endure to sit on motorbikes to hospital.During emergencies at Night, we carry the pregnant woman on local stretcher .When you develope serious complications you will die,it has happened to some pregnant women here others too gave birth on the road .At first some don’t go to hospital but now there is no traditional birth attendant here so we endure” Rita Olesu, pregnant woman lamented.

The Eastern Regional Organizer of NGOs in Health, Edmund Duodu also the Executive Director of DMAC Foundation -a marternal and Child Health NGO, said government needs to increase investment in maternal health care .According to him, the infrastructural and logistics as well as human resources deficit in the rural areas are serious impediment which must be fixed to help in addressing the high number of avoidable deaths of Pregnant women.