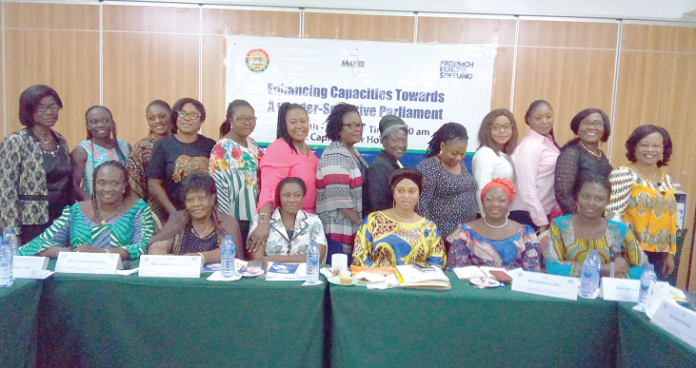 The Women Caucus of the Parliament of Ghana written to the government, recommending to it to extend the National Health Insurance Scheme (NHIS) to cover the cost of breast cancer reconstruction.

According to the women group, if even it demands that the government amends the National Health Insurance Scheme (Act 654), it should do, assuring that they will give it their blessing to make it a success.

“Mr. Speaker, the National Health Insurance Scheme of Ghana currently covers the cost of cryotherapy for cancer patients. Unfortunately for breast cancer, it does not cover the cost of breast reconstruction surgery. We recommend the government take necessary steps to extend coverage to include same, if it requires amendment to the National Health Insurance Scheme (Act 654)”, they noted in a statement delivered on the floor of Parliament, Wednesday, October 23, 2019, through their Chairperson, Hon. Sarah Adwoa Safo.

The World Health Organization has set aside the month of October for breast cancer awareness dabbed as “pink month”. It is celebrated by conscientizing and supporting awareness creation by advocating for early detection and treatment for the disease.

The International Agency for Research on Cancer, indicates that there are about 1.38m new cases and 458,000 death from breast cancer each year and is estimated to be the most common cancer worldwide.

In Ghana, the incidents of breast cancer are 0.76percent which is predicted to increase with time. Nearly 70percent of women diagnosed with breast cancer in Ghana are in advanced stages. Also, about 30percent of these cancer cases were below age 35 years. This indicates there is a shift of cancer disease from older women to younger ones, per the research by Frank Naku Ghartey Jnr and others.

Adwoa Safo, who is also the Deputy Majority Leader, added that the majority of deaths that occur in developing countries out of breast cancer is due to the fact that most women who are with breast cancer are diagnosed late.

“This is mainly due to lack of awareness on early detection and barriers to health services. This is the more reason why each of us must add our voices to the idea of awareness creation to help remedy the problem at its infant stages”, she said.