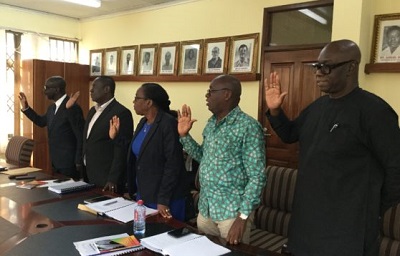 The Vetting Committee of the Ghana Football Association is likely to round off its sittings today (Wednesday), October, 02, 2019.

A source told Graphic online the committee may subsequently finish the report on the proceedings and present it to the NC on Thursday. All things being equal, the NC will announce the names of the successful candidates on Friday.

The second batch was made up of Wilfred Kweku Osei (Palmer), Fred Pappoe and George Afriyie on Saturday.

The much-awaited publication of the successful nominees will herald the elections of the 10 RFA chairmen and a representative of the Elite Women’s Clubs on October 18.

That will be followed by the elections of the Premier League, Division One and RFA representatives to serve on the Executive Council on October 24.

The electoral process will be climaxed on Friday, October 25, with the presidential election at an Extraordinary Congress. – Graphic