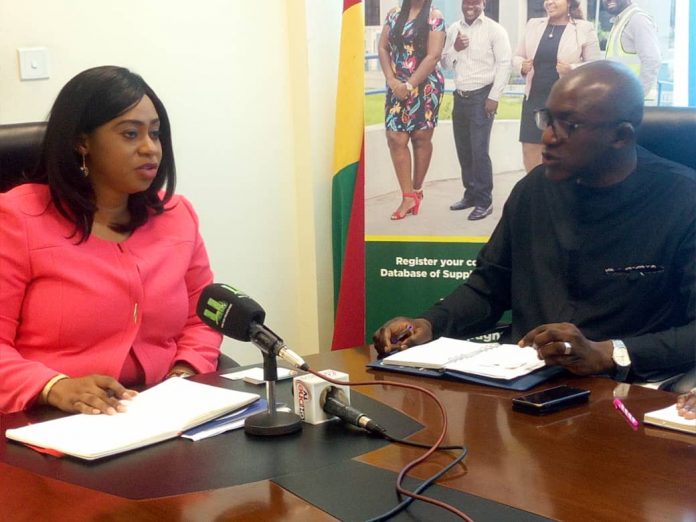 The delegation led by Abdoulie Tambedou, Director General of the GPPA, on Thursday, October 17, 2019, paid a courtesy call on the Minister of State In-charge of Public Procurement, Hon. Sarah Adwoa Safo, and the Acting Chief Executive Officer of the Public Procurement Authority (PPA) in Accra.

The three bodies representing their various institutions shared experiences in the public procurement processes and the roles they play for their respective countries.

Welcoming the delegation to Ghana, Hon. Sarah Adwoa Safo, commended them for pursuing that engagement with sister institutions outside their boundaries, noting that such a move is usually beneficial in that it enables them to share experiences and find common ground to be able to improve on the institutions that they head.

She took take the delegation through what the President, Nana Addo Dankwa Akufo-Addo is doing to strengthen the Public Procurement processes of the country by creating the Ministry solely responsible for Public Procurement matters, especially in the areas of policy, advisory and strategy to compliment the regulatory functions of the PPA.

She said lots of people were not in accord with the President for creating the Ministry in charge of Public Procurement “since they thought that it roles or responsibilities were going to conflict that of the PPA.

“My mandate is to influence policy – thus to direct government and advise His Excellency the President on certain policies on procurement that will benefit the whole system and the whole country. So, ours is policy, advisory and strategy. As a government how are we going on procurement? What are the policies that need to be passed? And what are the laws? So, these are some of the things that my office was created. It is a new trend that is developing. If you look at Canada, they have a minister for public procurement, if you go to Cameroon, they have a whole ministry on procurement. There are many examples that we can talk about”, she noted.

Hon. Adwoa Safo, who is also the first female deputy Majority Leader, Parliament of Ghana, further told The Gambian delegation about the policy document her outfit is working on which seeks to award 30% out of the 70% of all government contracts to marginalized groups, especially, women, persons with disabilities (PwDs) and the youth.

In addition to that, she said her outfit is also working on a Code of Conduct document to set a uniform benchmark for the actions and inactions of procurement professionals.

The Acting Chief Executive of the PPA, Frank Mantey, on his part, took the delegation through the operations of the PPA with a presentation of the activities of each department of the state agency.

He told the delegation that one of the key challenges confronting the PPA had to do with lack of funds.

He said because of lack of funds, the PPA has not been able to conduct a full assessment on entities which he noted, is one of the fundamentals of the Public Procurement Act.

According to him, the PPA used to have donor support with regards to such activities and therefore do not rely on the government for funds. However, such funding support is no more, thereby, making it very difficult for them to send officers to the field to conduct assessment on procurement entities. He is hopeful that that the PPA will have some funds in the 2020 budget statement and economic policy of the government which is yet to be presented to the Parliament of Ghana to enable it pursue that exercise.

The delegation was also taken through the e-Procurement project being pursued by the PPA with support from the World Bank.

Abdoulie Tambedou, Director General of the GPPA, on his part, also took Hon. Adwoa Safo and the PPA officials through what they have been in The Gambia and their willingness to learn from Ghana to improve on their system.

The GPPA, according to Mr. Tambedou, also plays advisory role in relation to new policies as well as compliance audit. Unlike Ghana, the GPPA have an internal training institute called Gambia Public Procurement Institute that provides training and certification to players in the public procurement arena. This, according to Tambedou, is part of the career development arm of the GPPA.

He said they were very much enthused with Ghana practicing sustainable procurement and also doing it best to award 30% of government contracts to marginalized groups.

Mr. Tambedou expressed the hope to replicate same in their activities to improve on their system back home.