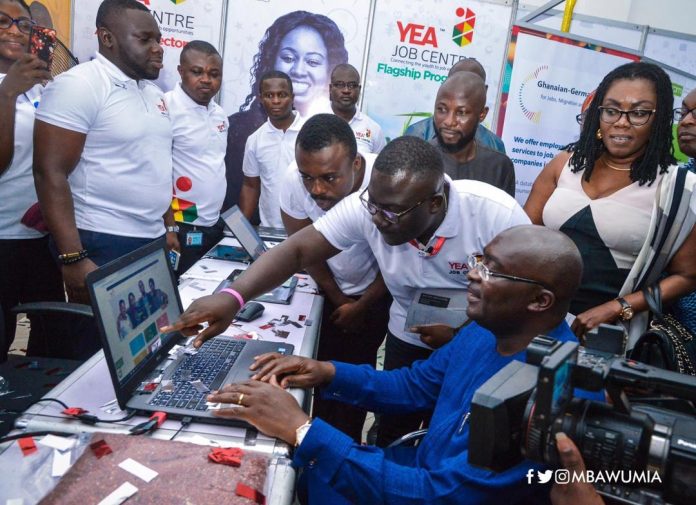 The Chief Executive Officer of the Youth Employment Agency (YEA), Justin Kodua Frimpong, says he feels so shy to open up when confronted with the number of youth unemployment in the country.

Nevertheless, he said it was time to spill the bean as his agency is working hard around the clock to change the narrative.

In truth, he said, the YEA does not have any database on youth unemployment in the country.

“…if you ask me today that as CEO of the YEA, how many youth in Ghana are jobless, I will not be able to tell you. As an employment agency, we don’t have that database”, he noted.

Mr. Kodua Frimpong made this schoking revelation, Thursday, when interacting with Accra-based Okay FM as monitored by Kasapafonline.com over the opening of a Job Center by the YEA at a ceremony held in Accra on Wednesday, October 2, 2019.

Furthering his submission, he indicated that the YEA since its inception in 2006 by the then President of the Republic, John Agyekum Kufuor, has no track record or data showing the number of permanent job avenues the agency has facilitated in securing for beneficiaries that have completed their various modules which provide temporary employment for the teeming unemployed youth over a two-year period.

“From 2006 to 2017, over 600,000 job seekers have passed through the various youth employment modules. All these people went through the two-year period. The brain behind the two-year is that after the two years, the beneficiaries would have secured a permanent job. But if you ask me if we have been able to give the over 600,000 beneficiaries engaged from 2006 to 2017 permanent jobs, I can’t give an answer” he opined.

He added “Section 2 of the law establishing the YEA states that it shall coordinate, supervise and facilitate the creation of jobs for the youth. Since 2006, we have developed various modules leaving out the facilitation of Job creation. What is so serious about the whole exercise is that research has proven that every year, 300,000 youth join the labour market in Ghana. Out of this 300,000, government agencies are only able to employ between 2 to 5%. The remaining 95% is left unattended to. Because of this, there was the need for stakeholder engagement to address the challenges at hand”.

It is based on these factors and the outcome of the stakeholder engagement that the YEA Job Center was created, Mr. Kodua Frimpong noted.

The YEA Job Center is an online portal that seeks to boos employment opportunities in Ghana for both employers and the teeming youth who are job seekers.

It is also meant to bring together job seekers and employers in both formal and informal sectors unto a common platform to expose job opportunities.

The Job Center provides two modules for job seekers which are online and the walk-in platform for assistance on employment related issues.