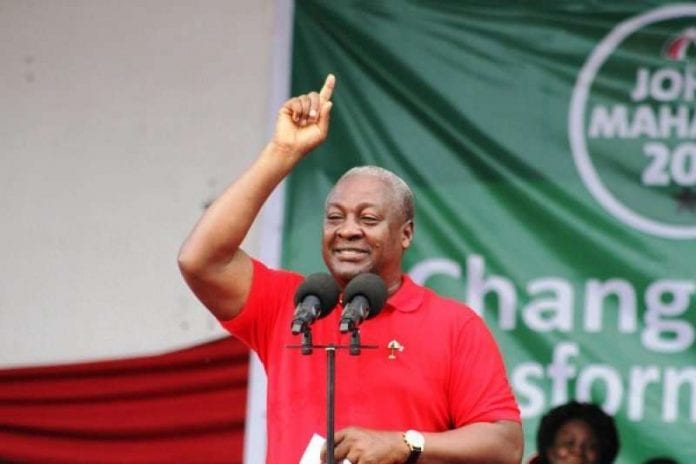 As a political thinker, listening with rapt attention to President John Mahama at the National Democratic Congress (NDC) inauguration of its 2020 manifesto committee on Wednesday, October 23, recently, I am of the opinion that his running mate is in the credible team.

President John Dramani Mahama hinted that the manifesto will be “bottom-up” in a far departure from previous ones. Meaning it’s grassroots oriented Manifesto meaning Government of the people by the people and for the People.

From the look of things President Mahama is hiding his Running Mate in plain sight in the Manifesto team. This, I’m convinced would make him/her a master of the policies and programmes he (Mahama) would roll out in his second coming.

In short, the running mate is in the team to enable him/her speak on authority when it comes to policy. The former president needs someone to effectively complement his effort during the campaign for a likely 2020 victory.

A running mate who would help in communicating a Bottom-up manifesto. I stand with the idea that a bottom-up manifesto would need a corresponding grassroots individual for to substantiate its credibility.

Meaning, a Grassroots Personality who will be in Sinc with the Manifesto may be chosen to make the ordinary Ghanaian have faith and identify with the policy document of the center left party. Let’s see the members. It’s chaired by a former Minister of Health, Professor Kwaku Danso Boafo, who also once served as Ghana’s Ambassador to Cuba.

The aforementioned notwithstanding, another school of thought posits that the NDC needs someone who is a Magnet for neutrals, and middle class. Granted, the grassroots form the backbone of the party and the workers in the hive that lay the foundation for victory.

However, elections for the past years have taught us, that the real kingmakers are the swing voters, so-called neutrals and middle class. Choosing a running mate that attracts this class of voters would a make a significant difference.

In 2008 President John Mahama used to be a “Neutral Magnet” when Ghanaians saw in him a running material to Prof Mills who after two runs were vividly identified with the NDC. It worked. His former boss himself was seen by Former President Rawlings as a ‘Neutral Magnet’ during his second term bid. He was the technocrat and university professor who was unassuming and, not power-seeking.

Yes, running mate, Mahama was known to be very gentle and level headed. He was not controversial and aggressive like some of his comrades. After becoming president for a term, the ‘bruises of the game’ have never left him the same.

He is still gentle, level headed, but as human who has once led, he has made enemies. That’s politics. He is now viewed as a more or less a typical politician. Some people say what’s he coming to do again. He’s had his time, others say he’s enjoyed it, it’s ok.

Others say we are in an Obituary State now under Nana Addo,  so let’s give him another Chance. He’s better than the Sitting President., so many views and ideas. He’s learnt his lesson. His popularity is with the party. He, as a result, needs the ‘Neutral Magnet’. That should be found in a running mate with no baggage. The one who can help the swing voter to easily do his job. The party’s vote can be assured anyway.

President Mahama was overwhelmingly endorsed. Like it or not if we need to vote for a running mate at Congress, General Secretary Mr Asiedu Nketia is likely to win. I will bet with my last Coin. But over the years the job of a running mate has not been to rally party supporters, but rather to attract the swing voters and the Middle class. The NDC used Amissah Arthur to neutralize Bawumia who was then winning the heart of the middle class. In a neck to neck elections, it’s the Neutrals and swingers who make the king. So who will be a Magnet Running mate For Neutrals/Swingers/Middle Class? Next week I will tell you the shortlist.

They are politicians but are not loud in Public Space. They have the Magnetic Touch and Magic Wand to move John Mahama to the Presidential seat 2020 if it’s the will of God.

2020 Election: Resist temptation to use violence – Mahama to Akufo-Addo