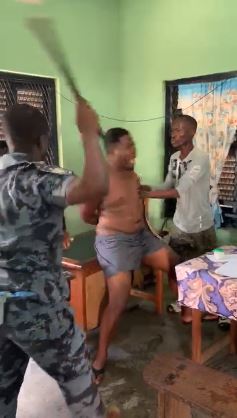 The MCE who doubles as chairman of the Municipal Security Council has, however, condemned the barbaric act of the now interdicted Police officers.

Commenting on the matter, the MCE said “I just got to see the video and I am terrified. I am not going to sit here and tolerate that at all. If the video circulating is true and indeed I can identify one of the Policemen, I think that we’re going to take it very seriously. I have even forwarded the video to the Municipal Commander and I am going to summon him here today so that we can talk about it.”

According to the MCE, the actions of the Police officers are unacceptable in a democratic dispensation and therefore ought not to happen again in the Municipality.

The officers have been named as Sergeant Patrick Amoako and Lance Corporal Isaac Marfo.

The Police officers were captured in a video taken by the complainant identified as ‘Foreigner’ who had reported the suspect, his employee, for stealing his GHC1, 600. The video shows the officers abusing the suspect, who was in handcuffs, with a belt, with the aim of getting him to confess to the crime.

The interdiction of the police officers was under the instruction of the acting Inspector General of Police James Oppong-Boanuh, Kasapa News has learnt.

This was after a preliminary investigation by a fact finding team from the Regional Police Headquarters implicated them. – Kojo Ansah