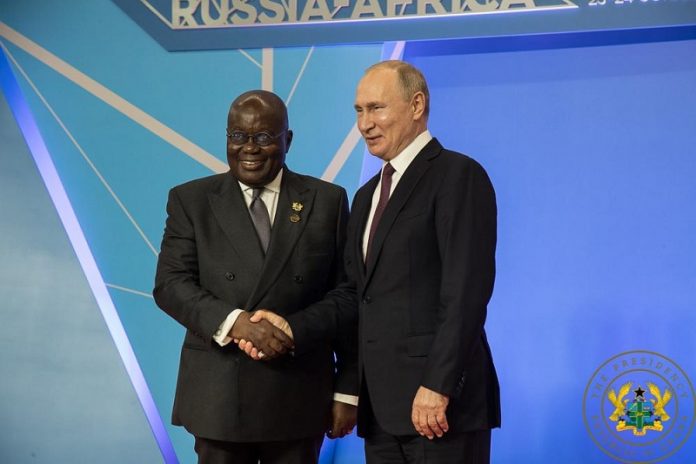 President Akufo-Addo, says Ghana wants her relations with the Russian Federation to be characterised by an increase in trade and investment co-operation, and not by the export and import of raw materials.

According to President Akufo-Addo, “this, we believe, is the way to develop healthy relations between our two countries. Our vision is to build a free, prosperous country, a Ghana Beyond Aid, as a dynamic component of an independent and prosperous Africa.”

The President made this known when he delivered a statement at the Russia-Africa Summit in Sochi, Russia, on Thursday, 24th October 2019, being held on the theme “For Peace, Security and Development”.

He indicated that “for us, in Ghana, our resolve is to build a value-added, industrialized economy with a modernized agriculture, trading in the global marketplace on the basis of things we make and grow, and to chart our own self-reliant, independent path within the world economic order.”

He continued, “We believe that effective co-operation with Russia will help us attain this goal.”

With Russia being strongly supportive during the Cold War of Africa’s struggle for decolonization and liberation from colonialism and imperialism, President Akufo-Addo noted that Russia, in the aftermath of the Cold War, has continued to increase its co-operation with Africa in several sectors such as health, energy, communications, mining and railway construction.

“Today, the deepening ties of friendship are evident in the growth in trade between our two sides, which stood at US$20 billion in 2018, a 17% rise over the previous year. At the multilateral level, particularly at the United Nations, Russia has also been supportive of Africa’s call for reforms at the UN Security Council, as set out in Africa’s Common Position on UN Reform – the Ezulwini Consensus,” he said.

Having urged other countries not to ignore Africa, the President was glad that Russia is not ignoring the continent.

“According to the World Bank, six of the world’s ten fastest-growing economies this year, including Ghana’s, are in Africa. The continent is rich in natural resources, and in possession of 30 percent of the earth’s remaining mineral resources. She has a vibrant young population, and, though there are still important security challenges, she is more at peace than before,” he stressed.

Highlighting the importance of the African Continental Free Trade Area (AfCFTA), which will cover a market of 1.2 billion people, with a combined GDP of $3 trillion, across the fifty-four (54) member states of the African Union, President Akufo-Addo added that, with Ghana playing host to the Secretariat, the AfCFTA holds excellent prospects for trade relations between the continent and Russia.

“We hope that this new era of Ghana-Russia and Africa-Russia relations will reaffirm the principles of solidarity, mutual trust, and respect, which have anchored those relations for several decades, and which will assist us to deliver peace, security, development, progress and prosperity for our peoples,” the President stated.