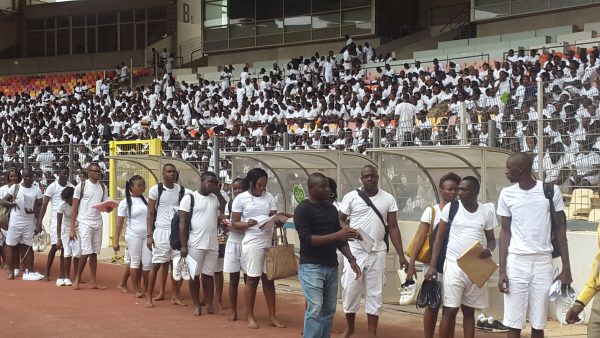 The Vice Chairman of the Defense & Interior Committee of Parliament, Collins Owusu Amankwa, has dismissed claims by law makers belonging to the opposition National Democratic Congress (NDC) that the government is secretly recruiting members of the New Patriotic Party (NPP) into the security agencies.

On Wednesday, October 30, 2019, NDC MPs served notice to the government led by President Akufo-Addo to immediately annul the secret 2019 recruitment of personnel into the Police Service, Prisons and the Ghana Immigration Service.

The group further urged the government to institute measures to root out cronyism and nepotism with respect to recruitment into the security agencies.

They contended that an exercise which was meant for all Ghanaians devoid of any political affiliation following the financial clearance by the Ministry of Finance to recruit 4000 personnel into the Police Service as well as 850 personnel into the Ghana Immigration and that of the Prisons Service was being executed by party lines.

However, Mr. Amankwa who is also the NPP MP for Manhyia North, in an interview with journalists on the sidelines of Parliamentary sitting, urged the public to treat the claims by the NDC MPs with the contempt that it deserves since there is no iota of truth in their statement.

“There is not iota of truth in whatever the NDC MPs are saying. The security agencies are recruiting Ghanaians. For instance, if you go to the Police Service or the Ghana Immigration Service, they have their own criteria to recruit based on the individual’s academic qualification. To the best of my knowledge, if you are being recruited into the security service and you did not pass very well your SSSCE or WASSCE in English and Mathematics, you can’t gain admission. Therefore, we have to take note of such criteria and this is what I was expecting the NDC as a responsible opposition party to talk about it. But if they come as usual to peddle falsehood because security by its nature is an intangible and because it is not visible, nobody is seeing it and therefore if you peddle falsehood, it will be very difficult for people to verify. But such claims are not true”, he said.

He further noted that in all the security agencies, there are criteria for selection, stressing that under no circumstances will the President, Nana Addo Dankwa Akufo-Addo, will compromise the system of selection into the security services.

“That will be the last thing the President, Nana Akufo-Addo’s administration will do in terms of compromising the security system. The NDC compromised the security system and recruited party followers and so now that they are in opposition, they feel like the governing party is doing same”, he noted.