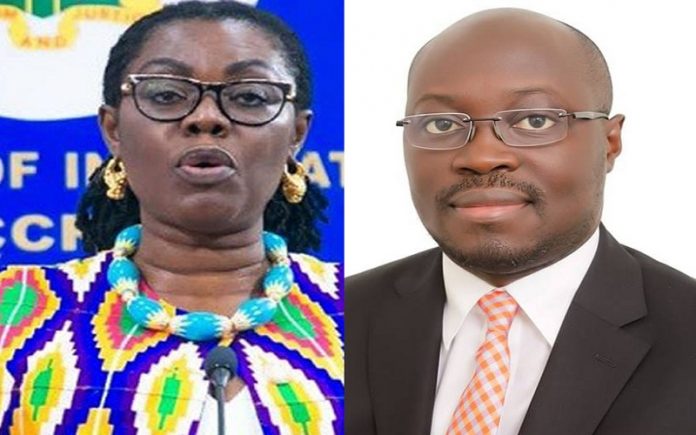 The National Democratic Congress (NDC) Member of Parliament (MP) for Ajumako-Enyan-Esiam constituency, Casiel Ato Forson, has written to the Minister of Communications, Ursula Owusu-Ekuful, informing her that she has no power to direct the telecommunications companies to put an end to the upfront deductions of the nine percent talk tax at the point of recharge.

Madam Ursula Owusu-Ekuful had directed the telecommunications companies as far as deductions of the Communication Service Tax (CST) popularly known as talk tax, is concerned, to treat it same way as the Value Added Tax (VAT), National Health Insurance Levy (NHIL), Ghana Education Trust Fund (GETFund) Levy and all other taxes and levies imposed on entities doing business in Ghana are treated.

According to her, the extraordinary upfront deductions of CST and notification of same to subscribers must stop with immediate effect. The directive was given when the Ministry of Communications met with the regulator, National Communications Authority (NSA) and the Mobile Network Operations (MNOs), Broadband Wireless Providers and Internet Service Providers on October 7th and 8th 2019.

In essence, she wanted the telecommunications companies to only charge or deduct the CST based on usage and not upfront as they have resorted doing in recent times.

Her directive was premised on numerous complaints from consumers over upfront deductions of talk tax at point of recharge when same has not even been used.

However, in Ato Forson’s letter dated Monday, October 14, 2019, and addressed to the Madam Ursula Owusu, he pointed out that her directive to the telecommunications companies was illegal and therefore called for the immediate withdrawal of same.

According to him, it is only the Ghana Revenue Authority (GRA) that has such powers to issue directives to the telcos as far as deductions of the Communications Service Tax (CST) are concerned.

“I would like to point out that: (1) Under the Revenue Administration Act 2009 (Act 791), the administration and management of tax revenues reside in the Ghana Revenue Authority, and (ii) the CST Act 2019 does not apply the principles of the Value Added Tax (VAT) Act 2013 (Act 870). From the two Acts, The Minister for Communications does not have the powers to issue an administrative order on how a tax policy should be implemented; and secondly, the CST cannot be treated in the same way VAT is treated”, the letter in part stated.

It added “The issuance of the directive is, therefore, an illegal act and should be withdrawn with immediate effect. It is unconscionable for the Government to increase the CST but insist that telecommunications companies hide the deductions from the consumers. If the government thinks the policy is making it unpopular, it should come to parliament to repeal the Act”.