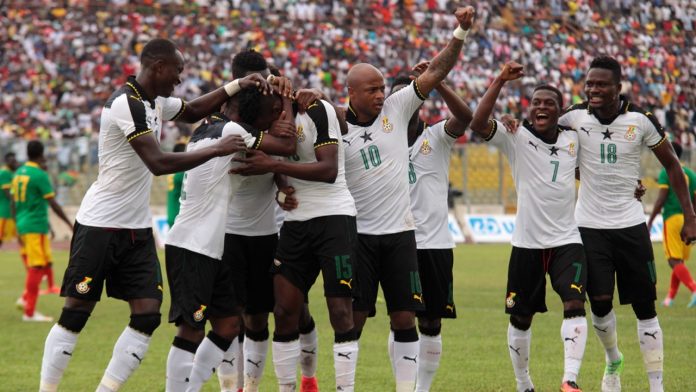 Ghana’s Black Stars are determined to kick start their journey to the 2021 Afcon on a glittering note when they host South Africa tonight at the Cape Coast Stadium.

Tonight’s opening qualifier, will mark a return to competitive football for the Black Stars since the African Cup of Nations in July, and the Stars are determined to open a new chapter after putting the Afcon setback behind them.

“Football is increasingly becoming difficult on the African continent and the qualification process won’t be all rosy. We will encounter tough challenges but we are determined to go through them and achieve our objective of qualifying,” said Andre Ayew.

“The process begins with South Africa, which won’t be an easy game but we are determined to give out our all and start on a very good note,” he added.

Andre Ayew and his colleagues are well aware of the team’s disappointment at the last Afcon, but he assures that as players, they have put that setback behind them and they are very focused for the future, beginning this evening.

“A player is one who wants to get back from a setback,” the captain of the side said, adding, “there is always a responsibility on us to make sure we make our country proud. We accept this responsibility. We won’t always get it right but we are determined to be up there.”

The Black Stars were warmly received by fans on their way to Cape Coast. Here in Cape Coast, the reception has been rapturous and a full house is expected tonight inside the Cape Coast Stadium.

Both Andre Ayew and Coach Kwesi Appiah have been impressed by the positive reception, as well as the support of Ghanaians and they are determined to reciprocate the gesture with a good performance.

“As players, our role is to ensure positive result. We are football players and we have to make sure that we get it right on the pitch for Ghanaians to be happy,” said Andre Ayew.

“We really appreciate the support Ghanaians have showed us; right from Accra, Winneba, Mankessim and Cape Coast. It’s now time for us to reciprocate by giving out our best to make our nation happy,” said Coach Kwesi Appiah.

Coach Kwesi Appiah is also confident the players he has in camp are capable of giving Ghana a great start in the qualifiers, despite disturbing injury situations. Mubarak Wakasso and debutant Mohammed Salisu withdrew from the squad and Lumor Agbenyenu is also nursing an injury.

Coach Appiah’s squad is a relatively young squad with up to nine debutants initially invited. With Mohammed Salisu unable to arrive due to his late  injury and Christopher Antwi Adjei’s expected to arrive late due to immigration issues, seven debutants are available to make today’s match-day against South Africa.

The match will kick off at 7:00 p.m. at the Cape Coast Stadium and there will be live updates on the GFA’s twitter handle @ghanafaofficial.