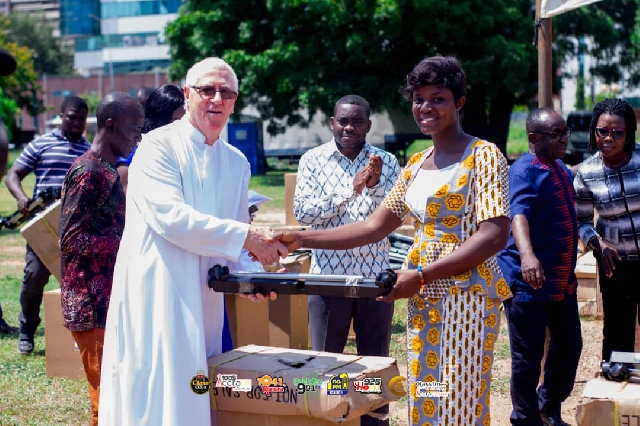 Broadcasting giant, the Class Media Group (CMG), is aiming at making a positive impact in the livelihoods of underprivileged seamstresses, tailors and hairdressers in Accra, through a benevolent gesture that seeks to empower artisans with free tools and guidance to unearth their talents and also grow their businesses. 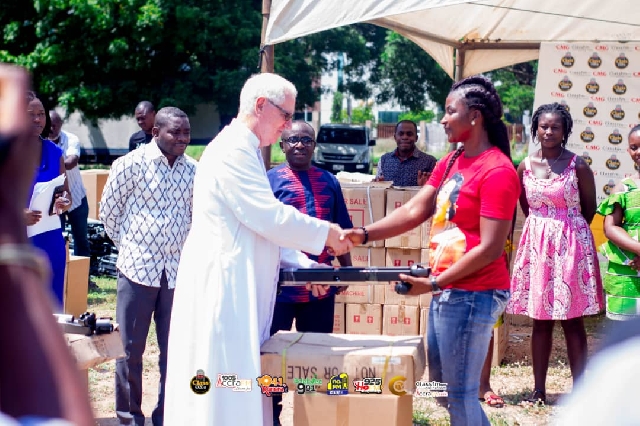 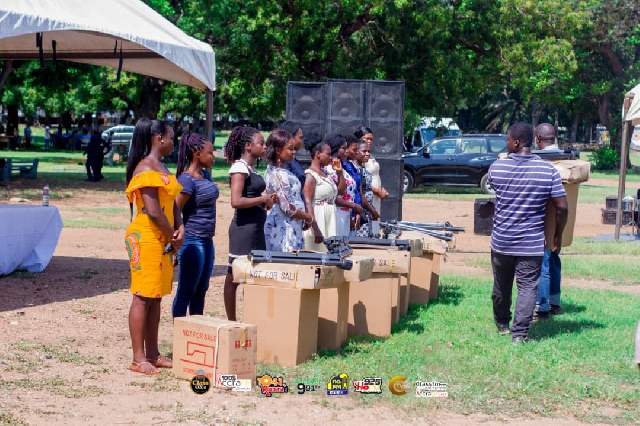 Dubbed: ‘Founder’s Empowerment Project,’ the measure is an initiative of businessman and philanthropist, Mr Seidu Agongo, to help skilful but underprivileged tailors, seamstresses and hairdressers to nurture their talents and be gainfully employed. 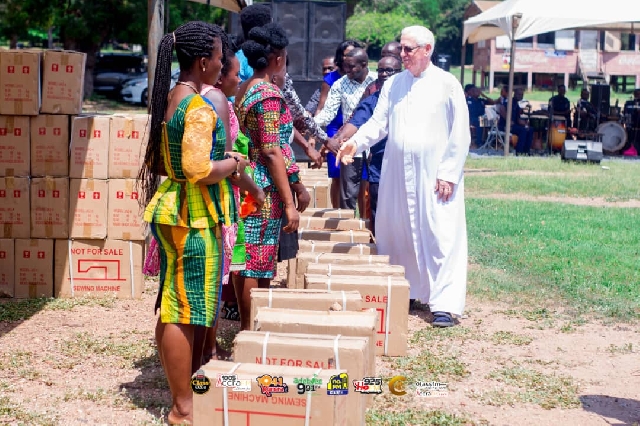 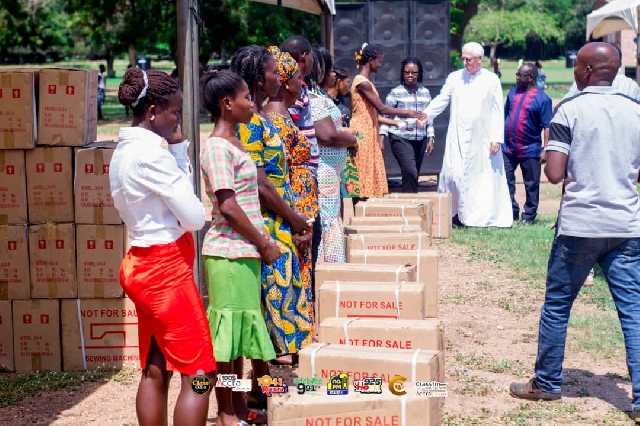 At a launch in Accra today, the first set of 86 hairdryers and sewing machines were given to 86 beneficiaries in the Greater Accra Region, paving the way for similar donations to be carried out in other regions across the country. 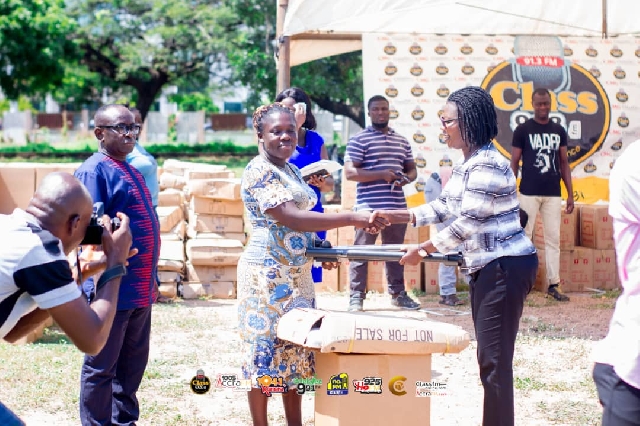 The event was chaired by Reverend Father Andrew Campbell, the Parish Priest of the Christ the King Church and staunch crusader of the underprivileged in the country. 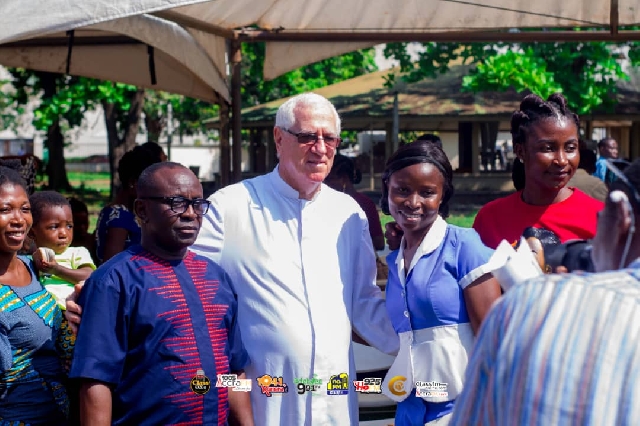 Twenty-one hairdryers and 65 sewing machines were given to the overwhelmed beneficiaries at a colourful event at the Efua Sutherland’s Park on Wednesday, 6 November 2019. The beneficiaries were chosen from over 1,000 people who participated in a selection process. Prospective beneficiaries are the audience of CMG’s various business units but were screened and shortlisted through an on-air promotion. The launch was witnessed by hundreds of individuals in the beauty and fashion industry.

The Group CEO of CMG, Mr Kojo Ackaah-Kwarteng, said the launch marked the philanthropic gesture of CMG founder, Alhaji Seidu Agongo, and will be replicated by the sister media outlets in their areas of operation. 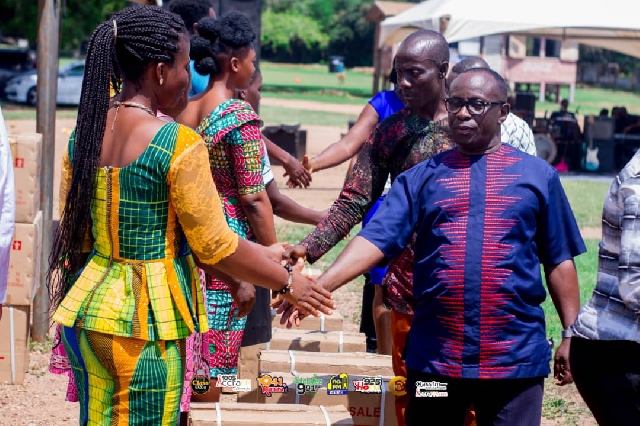 He said stations such as Kumasi 104.1FM and Adehyee99.1FM in the Ashanti Region will organise theirs in Kumasi while Ho 92.5FM hold its in the Volta Region. Tamale FM and Takoradi FM will also do theirs in Tamale in the Northern Region and Takoradi in the Western Region respectively in the coming weeks, he said. 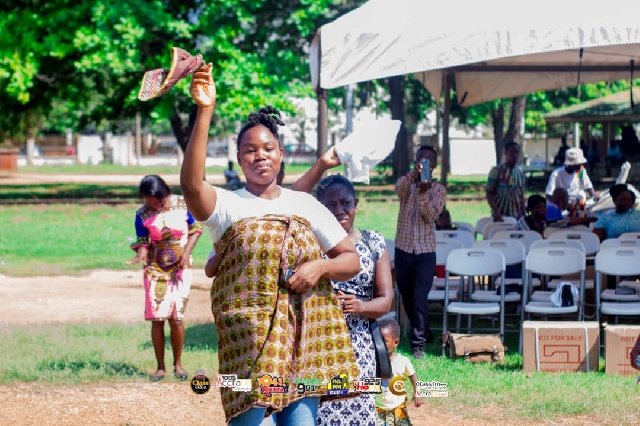 He said beyond the donation, CMG and its subsidiaries will follow-up with further training and skills enhancement for the recipients. 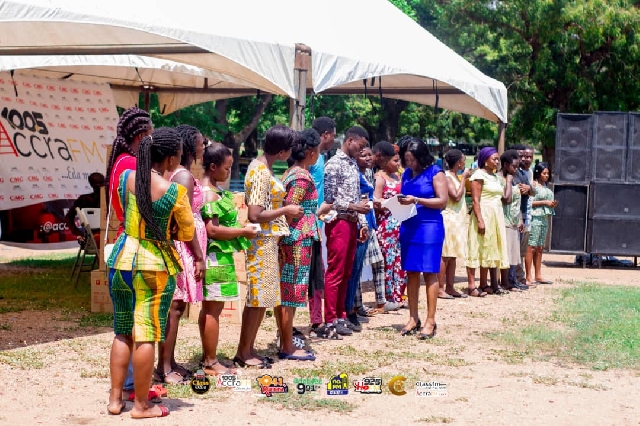 Mr Ackaah-Kwarteng thus charged the beneficiaries to ensure that the equipment are used for the purpose for which they were given and “warned them” against using the machines for activities that are at variance with the intended objective of the ‘Founder’s Empowerment Project’.

“They must also think of others and provide free training to others who cannot also afford”, Mr Ackaah-Kwarteng noted, so that they can “multiply the gesture that our founder has demonstrated”.

The President of the Ghana Hairdressers & Beauticians Association (GHABA), Tina Offei Yirenkyi, who graced the event, was full of praise for the founder of CMG and requested special prayers and blessings for Mr Agongo’s “unprecedented” project designed to support artisans.

She encouraged her colleagues “to never undermine themselves” but rather use their creative skills and talent to the benefit of their families and society.

Ms Yirenkyi pledged the support of GHABA to the young artisans through technical and educational assistance.

An overwhelmed Stephen Korankye, a middle-aged tailor, who was one of the beneficiaries, said: “It’s like I am flying in the air right now. I’m very joyous. Joy really comes from deep within you when the unexpected happens and I’m very happy. What I was hoping for has finally reached me”.

A young lady from Accra, Sandra, another beneficiary, could not hide her excitement as she recounted: “I didn’t know I will get any sewing machine and I never thought anyone will buy it for me but it is a blessing as they called me just this morning to come and take my machine. I thought the person was lying but by the time I reached here, I saw another lady who said she was coming to pick her hairdryer. So, what I will tell him [the CMG founder] is that God richly bless him. I saw the machines when I got here and I am very happy”.

Believe Sablah, another beneficiary explained that her boss’ radio dial is always on Class 91.3FM, and, so, she got to know about the project through Class FM. She said she heard the advert about the invitation for entries for the ‘Founder’s Empowerment Project’ from needy artisans and then informed her boss that she wanted to put in an entry “and see whether God can help me to get one of the machines”.

Young Sablah said her boss endorsed her decision and they videoed her while she sewed a dress and later submitted the recording to the ‘Founder’s Empowerment Project’ organisers.

To her surprise, she got a call “that I have won a sewing machine”.

She said she likes and listens to Class91.3FM, adding that the icing on the cake was meeting the host of the Executive Breakfast Show, Benjamin Akakpo, and host of the mid-morning show, ‘Touch of Class’, Natalia Andoh.

The ‘Founder’s Empowerment Project’ adds to the numerous charity programmes of CMG that the group uses to support the less privileged in society.

CMG organises the annual Celebrity Easter Funfair and donations to orphans in the Greater Accra Region; yearly donations to mothers and a GHS50,000 support to single mothers.