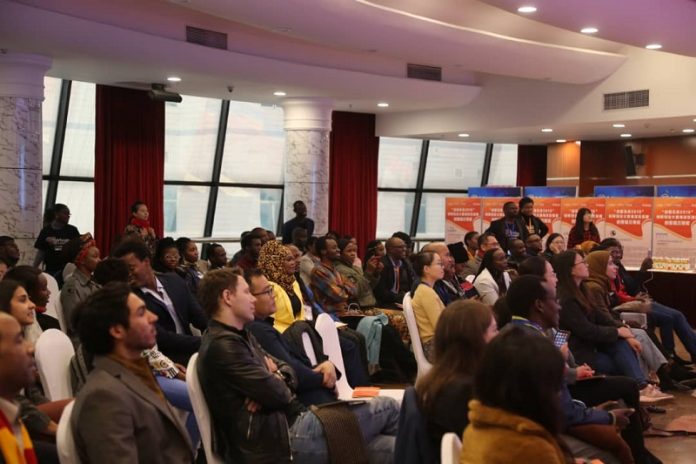 In its effort to contribute to the promotion and positive branding of Africa, Duapa Africa; an African social enterprise in China organized the 2019 edition of its Africa Dialogues conference; an event aimed at changing the African narrative in China and the international stage.

Held at Haidian Pioneer Park Auditorium in the Haidian District of Beijing, the event was held on the 26th of October 2019 and attracted over 150 participants including speakers and diplomats from all backgrounds and nationalities across the world.

For a long time, Africa’s image outside the continent has been marred with wrong and sometimes unsubstantiated remarks.

Irrespective of the many interventions and branding campaigns done by the Africa Union and individual African countries, there is an existing gap in how Africa is perceived.

Considering the fact that China has been Africa’s largest trading partner since 2009, events that promote and enhance the image of Africa are needed to ensure confidence in Africa’s services and products. Again, such events improve the people to people exchange between Africa and China and positively contribute to closing of the wide gap that exists between both cultures. Themed “This is Africa: A Thriving Hub of Global Talents and Innovation”, this years Africa Dialogues focused on Africa’s technology, culture, tourism and people to reshape the thoughts and perceptions about the continent.

In an opening address to participants, Mr. Musa Frimpong; Founder and CEO of Duapa Africa explained his team’s motivation for initiating the dialogues and being consistent with the objectives in China.

He shared previous success stories and how previous editions had been a springboard for African and Chinese joint ventures and business collaborations and reiterated that the dialogues had been instituted and would be organized every year.

Delivering the keynote address, Mr. Elisio Benedito Jamine; Senior Political, Peace and Security Officer at the AU Permanent Mission to China;on behalf of H.E. Mr. Rahmat-Allah Mohamed Osman, Permanent Representative of the African Union to China commended the Africa Dialogues initiative and congratulated the team for organizing the event. He also shared in the themes of all the speakers and added that Africa’s future through the agenda 2063 roadmap required such initiatives to unravel the pertinent issues.

Ghana’s Ambassador to China, H.E. Edward Boateng shared his experience as a business executive on the Africa continent leading CNN’s Africa drive and how the story of Africa was poorly and inadequately told. He stressed on the power of media and how governments and the African Union can adapt to tell a positive story. He also emphasized on the gradual impact dialogues and fora such as Duapa’s event make in the long term.

African development challenges and opportunities were highlighted by Opeyemi Awe; a Schwarzman Scholar at Tsinghua University.

She added that collaboration between Government, entrepreneurs, Diaspora and civil society can turn the challenges into opportunities. Maha Jouni from Tunisia shared the unique story of Northern Africa and emphasized on the need for Africans to be committed to the development of the continent. Edwin Mwenda; Founder and CEO of AHAVAH group presented on African social innovation clled for increased innovative models that go beyond government and enhance private sector involvement.

He also proposed the creation of a Pan African Centre here in China to enhance synergy between Africa and China.  Tina Tendai from Zimbabweintroduced the concept of building Africa brick by brick. In her speech, she encouraged participants to make contributions irrespective of how small or where they are located. Jesus P.G founder and CEO of Shanghai International services agency shared the greatness of Africa story from the ancient days where it pioneered great civilization to the present and made projections for the future.

In her special message, the Kenyan Ambassador to China; Ms. Sarah Serem expressed confidence in the African youth and proposed that the leadership mantle be passed to the younger generation of Africans who she believes are ready enough to carry it forward and build on the achievements of the current generation. Other diplomats and dignitaries present were Mr. ElisioBeneditoJamine; Senior Political, Peace and Security Officer at the AU Permanent Mission to China, Mr. Edwin Limo; Counsellor at the Kenyan Embassy in China, Ms. DeSouza Nadege; Counsellor at Benin’s Embassy in China, Dr.LuoZhuowei, Deputy Director at the Investment Promotion Centre of the China Council for the Promotion of International Trade(CCPIT) and Mr. Xinliang Zhao,Director of Haidian Pioneer Park. The event had performances from African talents such as DeSam and Mike from Ghana and Isaac from Malawi.

Founded in April 2018, Duapa Africa is a social enterprise dedicated to Africa’s socio-economic transformation and sustainable development through an innovative solution. It is one of the few wholly owned and registered African enterprises founded and managed by young Africans in China.