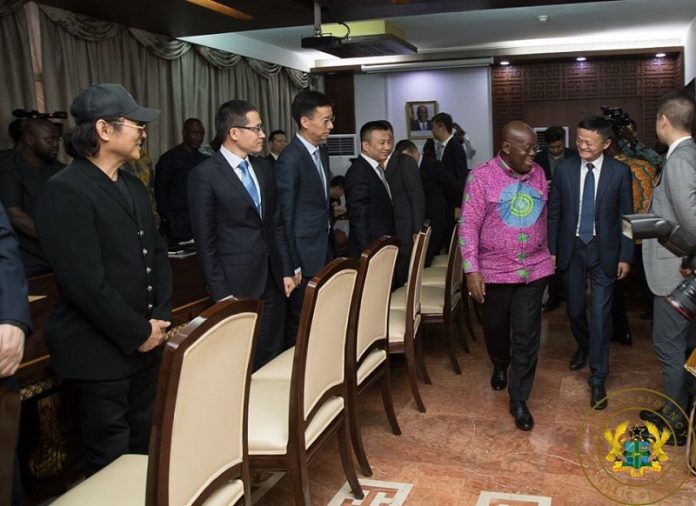 President of the Republic Nana Addo Dankwa Akufo Addo has indicated strongly that the government he leads is open to all things directed at the development of entrepreneurs in Ghana and in the whole Africa.

President Akufo Addo in his discussions with Jack Ma, the internationally acclaimed businessman and co-founder of Alibaba Group, one of the world’s largest e-commerce businesses, at the Jubilee House when he paid a courtesy call on him said, government is very committed to the view that entrepreneurship and enterprise is the way forward for economic growth and success.

“We are very committed to this view. There are many things that we have done ourselves here in Ghana to try and instill the spirit of enterpreneurship and promote enterprise and promote a sense of enterprise amongst especially our young people,” President Akufo-Addo posited. “We believe that that has to be the way forward in the life of our country.”

Absence of Ghanaians in the ANP

The President however expressed disappointment in the fact that there are no Ghanaians competing in the maiden Africa Netpreneur Prize Initiative of the Jack Ma Foundation which is what has brought the business mogul to Ghana. He charged the Minister for Business Development Mohammed Awal to ensure that next year’s competition would have a Ghanaian amongst the competing entrepreneurs.

Jack Ma, in his submissions during the meeting indicated that since stepping down as Chairman of the company he co-founded, he has turned his attention of four main areas namely, education, enterpreneurship, women in leadership and environmental issues.

“I believe entrepreneurs, especially the small-medium companies, are the key factors for developing the world and to keep the system of growth for every economy,” Jack Ma said.

A former English teacher, Jack Ma co-founded Alibaba Group, one of the world’s largest e-commerce businesses. In September 2019, Jack Ma stepped down as Alibaba’s Executive Chairman and he was succeeded by CEO Daniel Zhang. The 2014 IPO of the company he founded in New York set a record as the world’s biggest public stock offering, raising $25 billion. Ma’s investments beyond Alibaba include stakes in Chinese entertainment industry firms Huayi Brothers and Beijing Enlight Media.

The Africa Netpreneur Prize Initiative is Jack Ma’s flagship entrepreneur program in Africa led by the Jack Ma Foundation. Its mission is to identify and spotlight African entrepreneur heroes and their stories to inspire the continent and beyond. After seven months and nearly 10,000 applications, the Africa Netpreneur Prize Initiative has chosen the 10 finalists for the competition‘s grand finale event in Accra, Ghana, on the 16th of November, 2019.