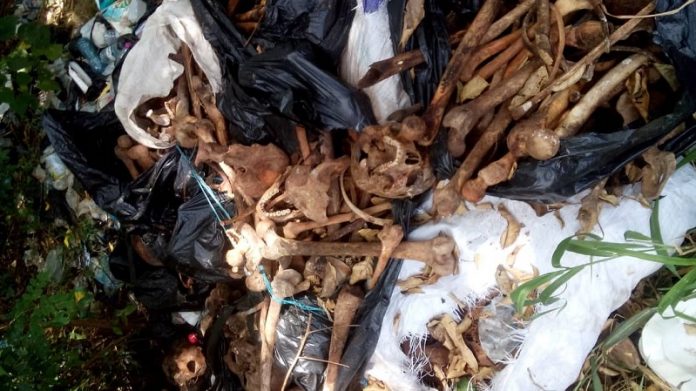 Sacks and Polytene bags containing large quantities of bones suspected to be various parts of human skeletons have been found in a valley along Akuapem Larteh and Ayikuma road in the Eastern Region.

The human parts were found by a Motorcyclist who informed Police.

The Akropong District Police Commander, Superintendent Stephen Tetteh, told Kasapa News the large quantities of sacks were found in the valley when Police visited the scene with some traditional leaders in Larteh.

He said investigations have commenced but police suspect that the human remains were exhumed and dumped by estate developers building in old cemeteries or grave looters.

“Preliminary investigations suggest it was dumped there for quite some time. The possibility could not be ruled out that the remains were dumped by grave looters”

The Deputy Public Relations Officer of the Eastern Regional Police Command, Sergent Francis Gomado, allayed fear of residents in Larteh and its environs that further investigations are being conducted to ascertain where the skeletons were brought from before being dumped in the area.