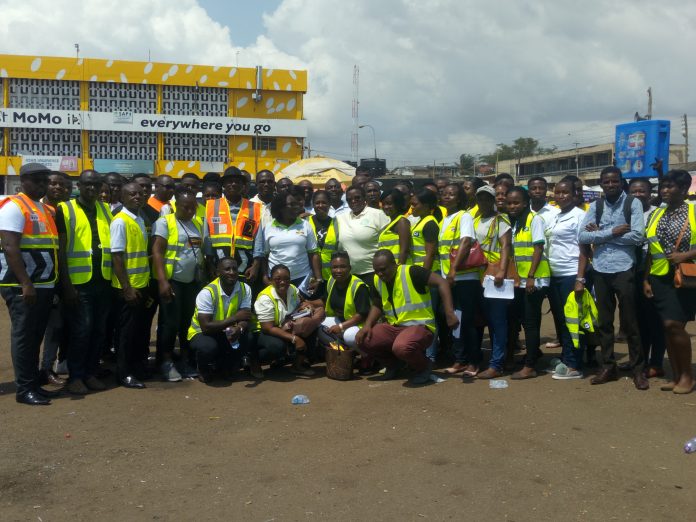 The Minister of Transport, Hon. Kwaku Ofori Asiamah, has charged all stakeholders in the road safety sector to come together and work to ensure an accident-free Christmas for the year 2019.

According to the Minister, available statistics about road crashes in the country from January to September, 2019, paints a gloomy picture, stressing that a little discipline on the part of road users would have saved thousands of lives who in diverse ways, have been contributing to the development of the country.

“This year, the issue of road traffic crashes has been on the headlines of newspapers for very unpleasant reasons. Many families’ were in misery over the painful death of their relatives and loved ones in preventable circumstances. This narrative must not continue and together, we must put a stop to it”. 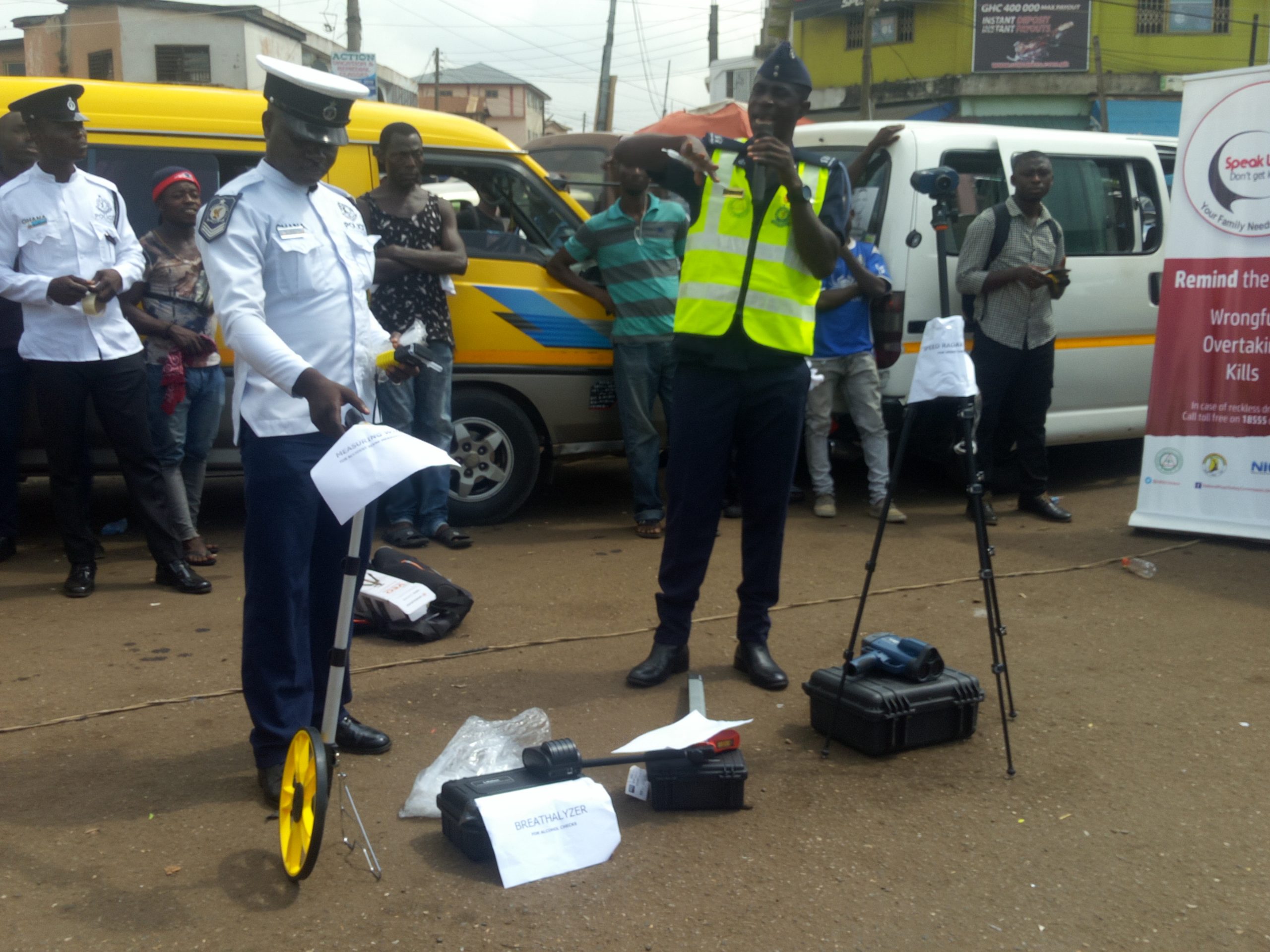 “Between January and September this year, we have recorded over 1,500 deaths from road crashes alone. Most of the crashes were as a result of indiscipline and disrespect for the road regulations in relation to driving above the speed limits, driving under the influence of alcohol and drugs, nonuse of seatbelts, wrongful overtaking among others. These incidences do not happen by themselves but through our own actions and inactions. The deaths could have been prevented if road-users had exercised self-discipline and demonstrated responsibility for safe road use practices and compliance with existing road traffic regulations”, he noted.

Hon. Kwaku Ofori Asiamah made this observation through his deputy, Hon. Daniel Nii Kwartei Titus-Glover, who represented him at the 2019 launch of Road Safety Christmas Campaign held at the Kaneshie Lorry Station on Tuesday, November 19, 2019.

As part of the campaign dubbed ‘Stop Road Accident Now Before it stops you’, there will be vigorous outreach programme running from December 5, 2019 through January 7, 2020, with personnel from the National Road Safety Authority expected to be positioned on the major roads, transport terminals, schools and other public places throughout the country educating on safe road use.

The Ministry of Transport and its agency, the National Road Safety Authority, are also collaborating with the Motor Traffic and Transport Department of the Ghana Police Service to scale-up enforcement activities on the provisions of the Road Traffic Regulations in relation to travel speeds, drink driving, and use of foot bridges among others. 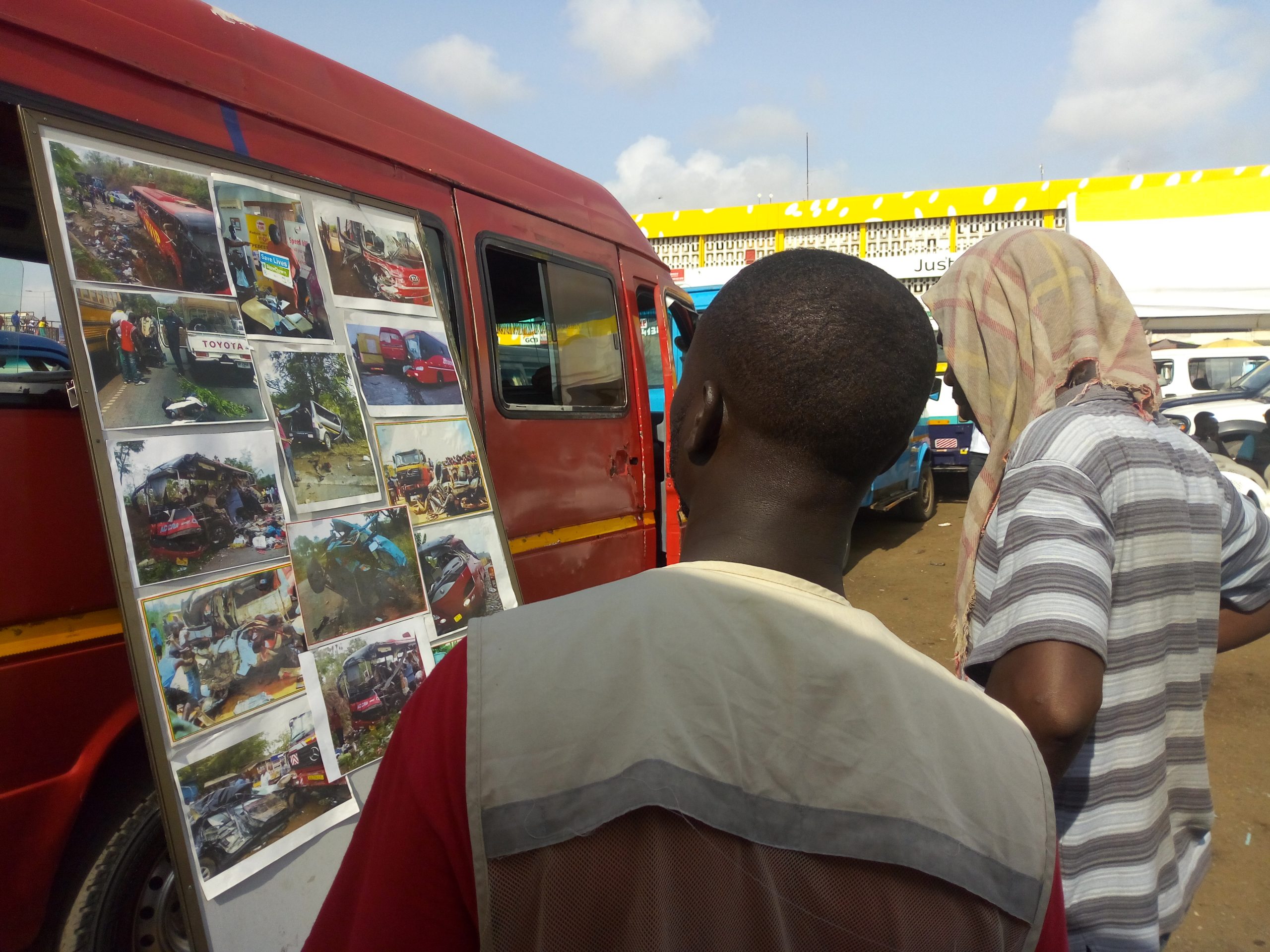 Commenting further, the Transport Minister urged the public to continue to support the government in the fight against road crashes in the country since it cannot do it alone.

“We will continue to show leadership in the areas of reforms, resources and improving infrastructure and on the part of road users, we expect you to uphold the tenets of the Road Traffic Regulations. Let us strive to be each other’s keeper. Every home, workplace, church, Mosque, Bus Terminal and associations must have a Road Safety Champion whose duty is to remind us of the little things we ignore that can potentially lead to someone’s demise”, he noted.

He then urged passengers to speak up against driver misbehavior, adding that “if we all uphold laid down traffic rules, I believe we can end the year without any traffic incident”.

The Director-General of the National Road Safety Authority, Ing. May Obiri Yeboah, commenting on the campaign, said despite putting in place so many measures aimed at curbing road crashes on the roads of the country, the number of recorded incidents are very disturbing. 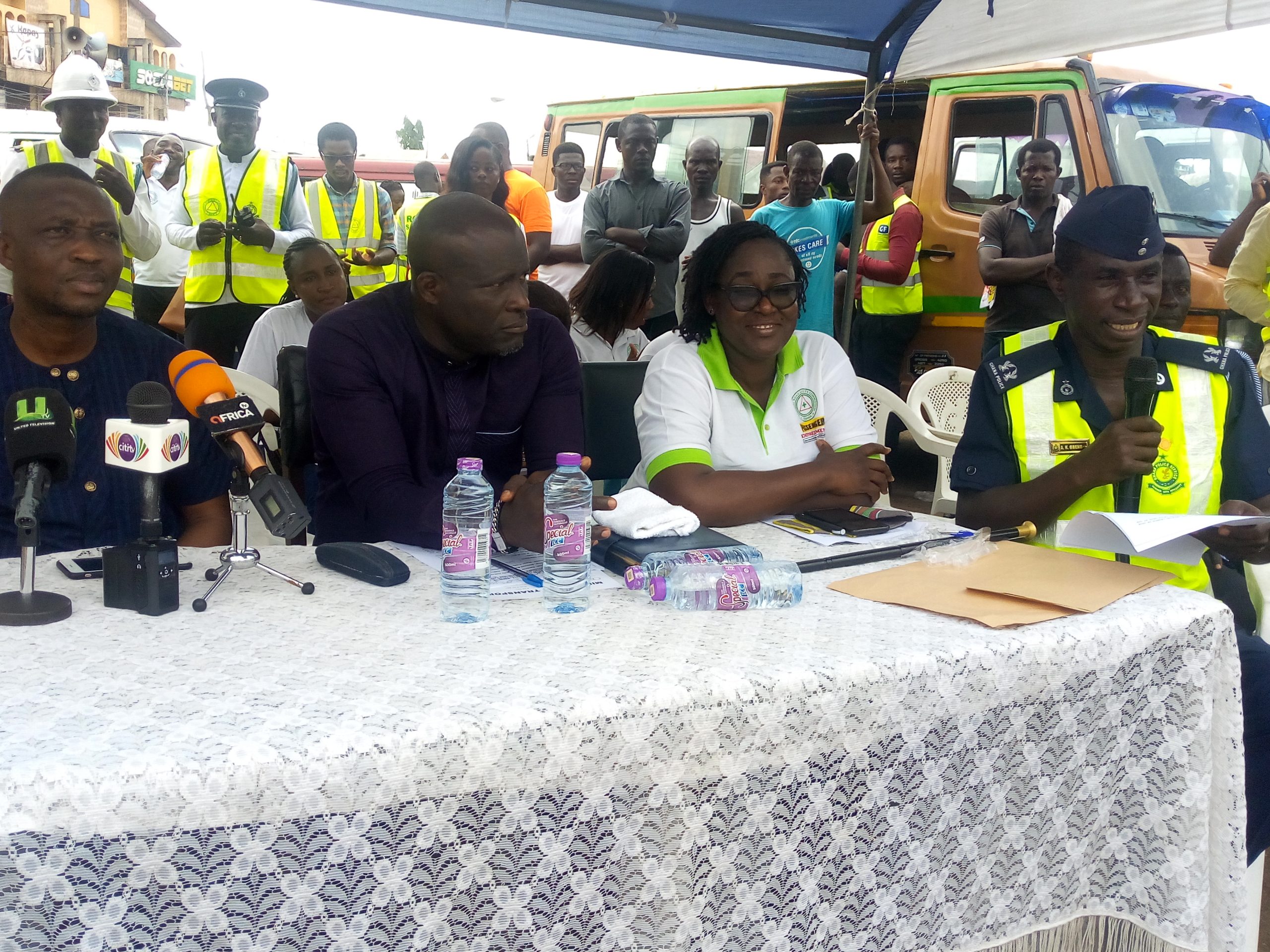 “Provisional statistics for the month of January to October, 2019, recorded a total number of 11,342 crashes resulting in 1,915 deaths, 2,418 pedestrian knock downs and 11,520 injuries involving a total of 18,252 vehicles have been recorded. This comprises of 6,951 commercial vehicles, 7,932 private vehicles and 3,369 two wheelers and three wheelers. This situation compares unfavorably with the situation of the same period last year, the number of road traffic crashes and persons injured have increased by 1.64% and 3.50% whereas the number of deaths and pedestrians knock downs have decreased by -0.31% and -7.07%. Preliminary investigations into the above crashes show that, non-compliance with road safety regulations on the part of drivers, motor riders and pedestrians is as much a concern. We will intensify our efforts and ensure that the rising figures reduce by the end of the year”, she promised.

The intent of the campaign, she noted, is to heighten sensitization for safer use of the road by all categories of road users before, during and after the Christmas and New Year festivities.

The Head of Education at the MTTD, Chief Superintendent Alex Obeng, recounted how indiscipline on the country’s roads have led to avoidable crashes that have claimed thousands of lives.

“Road transport in Ghana and elsewhere is challenged by an unacceptable level of road traffic crashes and its resultant fatalities. Last year for example, during Christmas from 24 to 26, our motherland registered 98 cases of road crashes. Vehicles that were involved were 140. Persons killed were 33 and 144 were injured. Looking at the figures, how long can we continue to let our people die on the road? This calls for all of us to come together as a nation to reverse this negative effect”, he recalled. 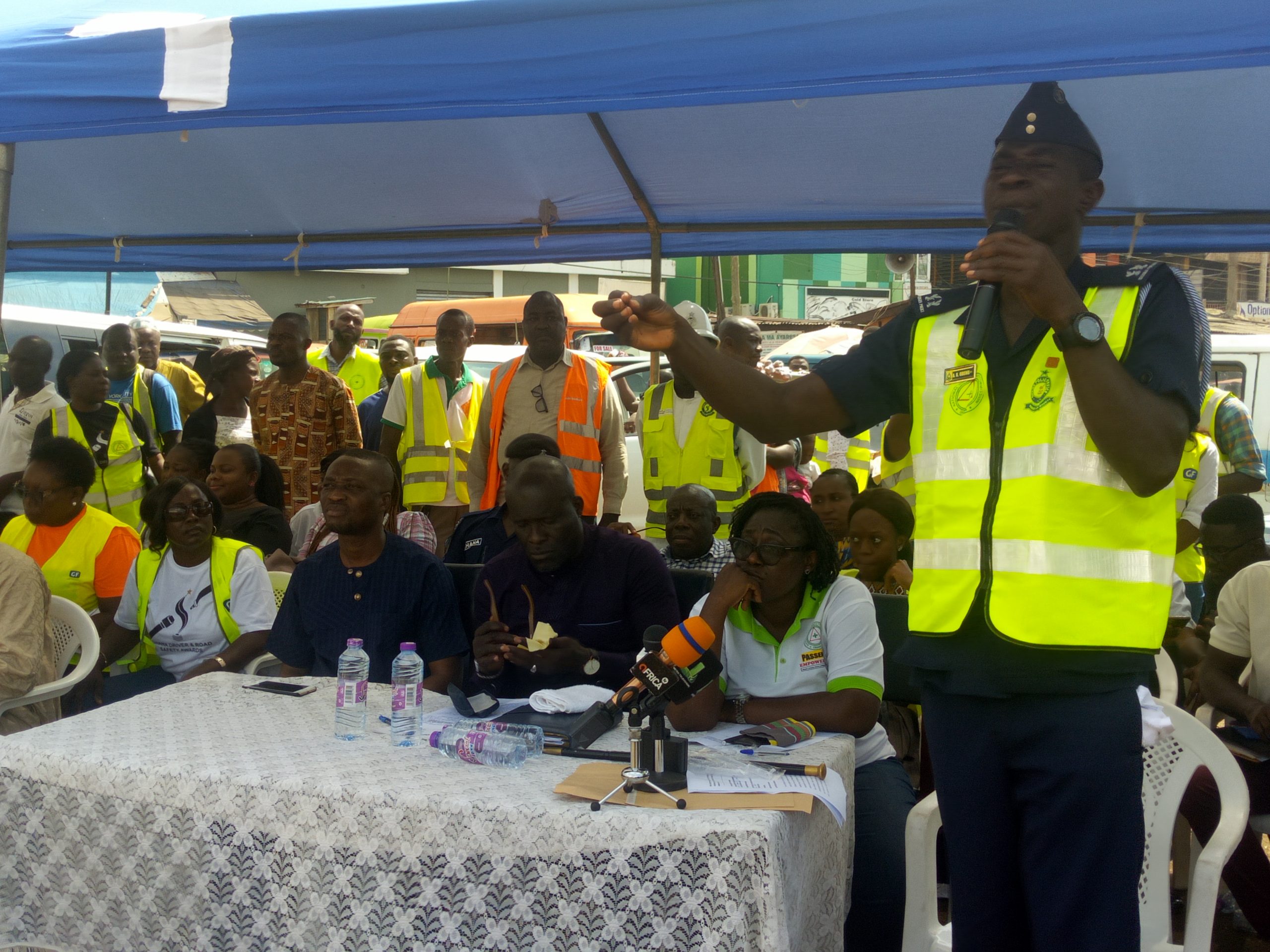 He said it is the ultimate objective of the MTTD to ensure that the yuletide is celebrated devoid of traffic congestion and the upsurge of traffic crashes during and after the celebrations by deploying visible traffic officers to manage and control traffic at the various traffic intersections and ensuring free flow of vehicular and human traffic nationwide.

That notwithstanding, he said traffic officers will be deployed on accident-prone roads and highways to enforce Road Traffic Act and Regulations thereby, arresting and prosecuting persons who will take advantage of the occasion to flout traffic rules and regulations with impunity.

“Unnecessary speed and alcohol abuse among others that may result in unavoidable crashes on our roads and highways will be vigorously checked”, he emphasized.