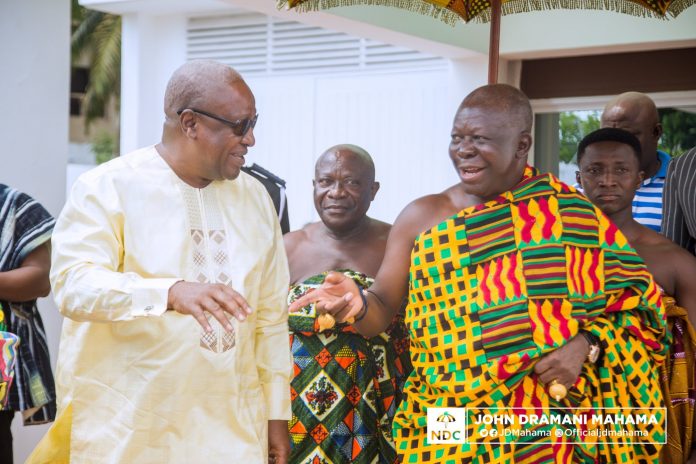 Accompanied by a retinue of Chiefs and elders from the Manhyia Palace, Otumfuo Osei Tutu exchanged pleasantries with the former President, his family, staff and some visiting African American school colleagues after which the two proceeded to hold private discussions.

The former President said the two discussed issues of national concern and thanked the Asantehene for making time to call on him in Accra. 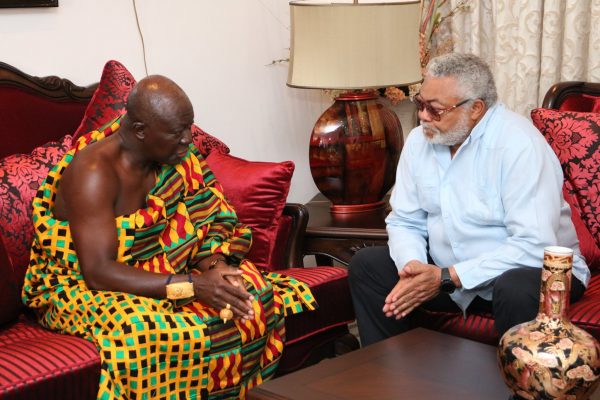 Otumfuo Osei Tutu was in Accra to deliver a keynote lecture at the University of Professional Studies. The lecture which was delivered on Friday was on the theme “Leadership: Strengthening Democratic Institutions for National Development”.

The Asante Monarch likewise paid the NDC Flagbearer, John Dramani Mahama a similar visit in his office in Accra.

Announcing the visit on Facebook, the former President wrote: “I had the honour of welcoming the Asantehene, Otumfuo Osei Tutu II, to my office on Friday, ahead of his UPSA Leadership Lecture 2019.

“It was an opportunity to once again discuss with the Asantehene a number of critical national development issues, and also tap into his wise counsel. Otumfuo Asantehene and I have always had a relationship underlined by mutual respect and brotherliness, and it was indeed a great honour to welcome him and his delegation.

“I was joined by the National Chairman of the NDC Samuel Ofosu Ampofo, Second Deputy Speaker of Parliament Alban Bagbin, former Chief of Staff Julius Debrah, executives of the NDC and former appointees to welcome the Asantehene”.

This comes on the back of a misunderstanding between the office of the former President and the Manhyia palace on what transpired after the 2016 polls.