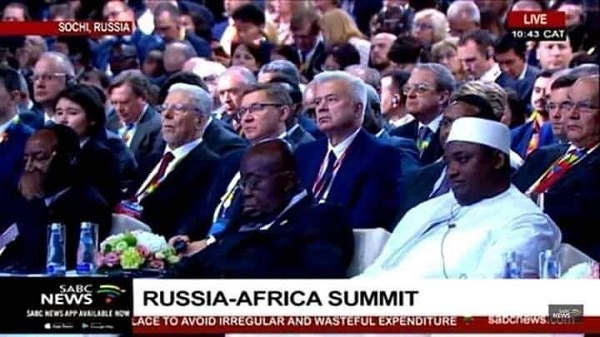 Former Deputy Minister of Communications, Felix Kwakye Ofosu says he’s utterly shocked that President Akufo Addo, who has gained the reputation for sleeping, even on the international scene would have the courage to accuse ex-President John Mahama of sleeping.

According to him, President Akufo Addo must be the last Ghanaian to be talking about somebody sleeping following his dishonorable conduct at the international conference, when he was caught sleeping.

President Akufo-Addo at the commissioning of a new Police Station at Keta and a Fire station at Ketu on Monday as part of his 2-day tour of the Volta Region dismissed the impression former President John Mahama sought to create suggesting that John Mahama and the NDC are yet to come to terms with their humiliating defeat in the 2016 general elections.

“The people who were asleep when they were in a comfortable lead only to wake up to find that the country has rejected them, they are still asleep. They would not wake up and see that Ghana has moved on. We are moving on to a new era of hope and progress,” he said.

The President, who found the comments of the NDC flagbearer quite strange, also stressed that God is not a wicked man to have maintained the NDC in power.

But Felix Kwakye Ofosu in an interview on Ekosii sen show monitored by Kasapafmonline.com urged President Akufo Addo to do well to stay away from courting unnecessary public ridicule with his comments.

“I hate to do this but the President has called for it. I’m surprised that it’s President Akufo Addo who’s accusing somebody of sleeping. Just about two weeks ago he embarrassed Ghana on the international stage when he was caught on camera sleeping at the Africa-Russia summit. Pictures of him sleeping while discussions were underway at the summit went viral on social media making Ghana the laughing stock on the international scene. Yet he has the audacity to be talking about ex-President Mahama and the NDC sleeping. The President must save himself from public backlash by keeping mute and not talking about things he himself is guilty of.”