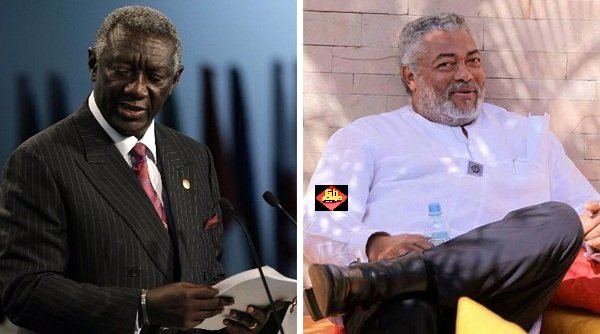 “If I were to call you a hypocrite and other adjectives related to your character defects, I would be stating a fact about your nature, Former President Jerry John Rawlings has replied his successor over their public spat.

In a tweet on Monday, Mr. Rawlings said he has been advised to ignore the former President, John Kufour, because no matter how true what he says, it rather draws some sympathy for him.

Ex-President Rawlings further maintained that  if not for the tolerance of Ghanaians and the country’s poor justice system, the law would have catch up with his successor John Agyekum Kufuor.

Mr. Kufuor Rawlings, had described Rawlings as a hypocrite after he[Rawlings] earlier accused Mr. Kufuor of being responsible for the perennial floods in the capital city.

“The Kufuor one, those Villagio villages and those things built in waterways…so if he can do it why can’t others do it…build their houses and factories on the southern side of the motorway where it blocks the waterway,”  Rawlings said last Thursday, when the Ghana Journalists Association (GJA) paid a courtesy call on him.

I’ll deal with callous agenda of bile by Ahwoi, others – Rawlings