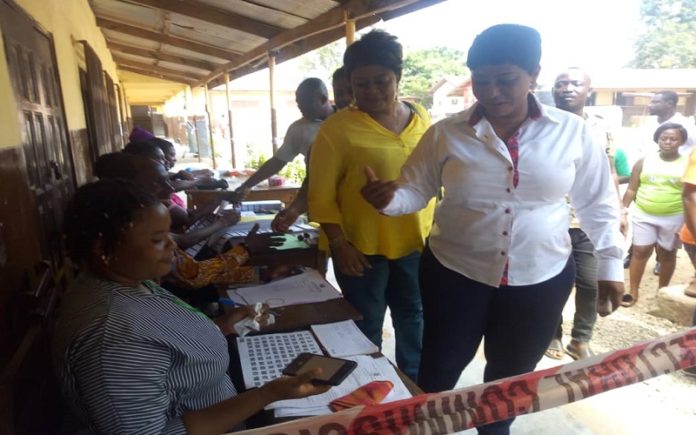 The Deputy Majority Leader of the Parliament of Ghana, Hon. Sarah Adwoa Safo, has proposed to the Electoral Commission (EC) of Ghana to consider holding subsequent district level elections on a weekend or a holiday.

This, she believes, will help improve turnout during such elections.

“Ghanaians are hardworking and don’t play with their work. And so, when elections are held on a working day, it is always very difficult for them to go out and vote in their numbers. Majority prefer going to work instead of going to cast their ballot. Going forward as a country, it is very important for us to discuss or interrogate the issue. I will propose to the Electoral Commission to consider holding such elections on a weekend or a holiday to improve turnout because local governance is also important”, she noted.

Her comments follows low turnout across the country in Tuesday’s district level elections, a situation which has caught many by surprise because of the massive publicity it enjoyed alongside the referendum which was later called off by President Nana Addo Dankwa Akufo-Addo.

Hon. Safo, who is also the New Patriotic Party (NPP) Member of Parliament (MP) for Dome-Kwabenya, made this proposal when interacting with journalists after touring some polling stations in her constituency to observe how the elections were being conducted.

Some of the polling stations visited include; Abuom Junction, DC Kwabenya, Taifa Church of Christ and Taifa Presbyterian 1A. There was low turnout in all the places she toured.

For instance, at the Taifa Presbyterian 1A polling station, only 25 out of a population of 720 as captured in voter’s register, had cast their ballot as at 1:00pm.

Interrogating the issue further, Hon. Safo said although voter apathy may be a contributory factor to the low turnout because not many people see the kind of work Assemblymen and women do, she was worried about the level education or sensitization that was carried out by the National Commission on Civic Education (NCCE).

She appealed to the NCCE and other state institutions mandated with such exercise to up their performance and not to rely so much on political parties to do a chunk of their work for them whenever there is elections.

The Presiding Officer at the Taifa Presbyterian 1A polling station, Francis Opoku Amponsah, in a brief interview with journalists also attributed the low turnout to a working day of which the exercise was carried out.

He also blamed the NCCE for not educating or sensitizing the people enough about the exercise, urging them to “do more than what they did”.