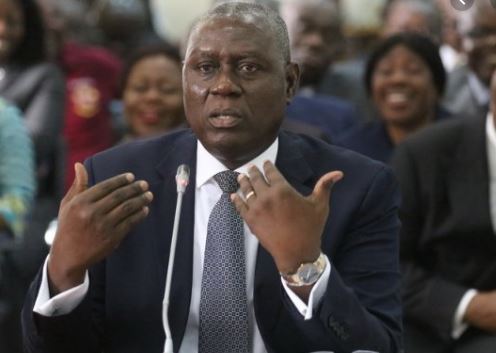 The Chief Justice nominee, Justice Anin-Yeboah has stated that a future election case will not be heard by the Supreme Court beyond 42 days.

According to him, the Rules of Court committee which is mandated by the Constitution to come up with the rules to regulate election petitions came out with new rules meant for 2016 elections which put to the period for hearing election petition not more than 42 days.

“We had a workshop at Senchi and we went through it and I’m assuring you that it will never be what we had earlier. It will be shorter but I cannot tell you it will take one or two weeks, the constitution makes provision for someone to be in the stead of the President and justice hastily administered will not be justice at all. But we tried in the old rules to fix the timelines for about 42 days, so if it is clear to honorable members then it means when an election petition is presented we can get rid of it within that shortest possible time, that is for 42 days.

“I think it will certainly put pressure on us to determine the petition if and only if it comes. But for the time being, if you’re dealing with justice please at times you have to be very patient,” Justice Anin-Yeboah stated during his vetting by Parliament on Monday.

Ghana experienced a landmark ruling in an eight-month-long prolonged tussle at the Supreme Court over the validity of the presidential results in the 2012 polls dubbed “Election Petition.”

This followed the challenge of the 2012 presidential results by the New Patriotic Party led by Dr. Mahamudu Bawumia.

The NPP argued that they had every reason to believe that the results were rigged in favour of the National Democratic Congress’ (NDC) candidate John Dramani Mahama.

They prayed the Court to declare their candidate, Nana Akufo-Addo as President with reasons that unpardonable malpractices and irregularities at 10,119 polling stations justified the nullification of 3,931,339 “invalid votes” which, the petitioners argued, would have beaten down John Mahama’s votes and overturned the declared results by the Electoral Commission.

The petitioners further argued that if the results of the 10,119 polling stations were annulled, President Mahama’s votes would have reduced by 2,622,551, which would have, in turn, beaten down the results declared by the Electoral Commission in his favour, to 41.79 percent.

They said although Nana Akufo-Addo’s votes would have, in like manner, been reduced by 1,233,186, he would have nonetheless secured 56.85 percent, per their permutations, to cross the 50 percent mark for victory.

But the nine-panel Supreme Court in its ruling read by Justice William Atuguba upheld John Mahama as the constitutionally elected President. The ruling, however, quelled the tensions in Ghana at the time.

The Supreme Court further made some recommendations to the Electoral Commission for subsequent elections.