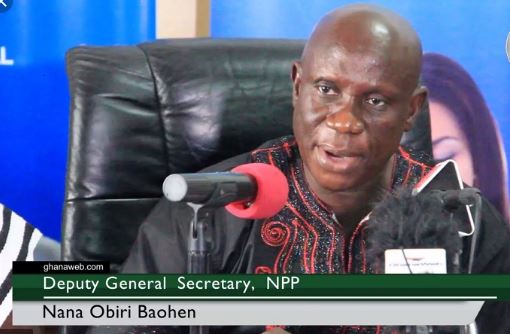 The ruling New Patriotic Party(NPP) has served notice that it will not withdraw the nomination of the Director-General of the National Communications Authority(NCA) Joe Anokye as its representative at Inter-Party Advisory Committee (IPAC) meetings.

The opposition NDC has raised red flags over the NPP’s choice of Joe Anokye as a representative at an IPAC meeting to discuss a new procurement and collation of results using services of the telecommunication companies as the backbone to transmit 2020 Presidential and Parliamentary election results.

National Chairman of the NDC, Samuel Ofosu Ampofo, told party members in Koforidua that the Director-General who is in charge of a regulatory body of the telecommunication companies was surprisingly introduced at the IPAC Meeting as representative of the NPP.

The move, according to Ofosu Ampofo, is “strange” and “unacceptable”

“Strange things are happening in this country. Only a few days ago, there was an Inter-Party Advisory Committee Meeting at the EC headquarters. When the NPP came and they were introducing their representative, Surprisingly lo and behold they introduced Joe Anokye, the Director-General of National Communication Authority as the representative of the NPP at the IPAC meeting”.

Mr. Ampofo added: “the IPAC meeting was going to discuss, a new procurement for registration and collation of results. And the EC said that they were going to use the Telcos as the backbone on which their system will ride. And so if you are going to use the telcos -I am talking about MTN, Glo and Vodofone and others as the backbone to run your system then the man who is in charge of regulating the Telcos is now representing the NPP at IPAC, how? So the NDC has raised the red flags and we say that this is unacceptable”.

But the Deputy General Secretary of the NPP, Nana Obiri Boahen in an interview with Akwasi Nsiah on Kasapa News said the NDC can go ahead and do their worst as the NPP’s choice of Joe Anokye will not change.

He said the NDC can choose to let the former EC Chairperson and her deputy, Charlotte Osei and Amadu Sulley respectively to represent the party during the next IPAC meeting if the party so wishes.

“What is wrong with the NPP nominating Joe Anokye as its representative at IPAC on this particular issue. Are you talking about legality or morality, tell us how this infringes on the laws of Ghana. If the NDC likes next time they should take Charlotte Osei and Amadu Sulley to IPAC as their representatives nobody will complain. Joe Anokye as an individual does not control NCA or telecos, doesn’t the NCA have a Board of directors, and don’t they work under a Ministry? The EC cannot tell the NPP who they should nominate to represent them at IPAC, we’ve brought our rep if the NDC don’t like him go and burn the sea.”