The citation described him as a selfless media personality whose love and kind-heartedness towards the poor, needy and less privileged in society is worth emulating.

HELP THE STREET FOUNDATION [HTSF] presented the citation to the host of Kasapa Entertainment/Starr Morning Zoo describing his dedication towards the development of Music and Film Industry as amazing.

He recently received another citation of honour for his remarkable achievements and time dedicated to the Entertainment industry from The Symphonials Ghana.

Kojo Preko Dankwa has carved a niche for himself as a leading entertainment show host.

HELP THE STREET FOUNDATION, is a foundation that seeks to put smiles on the faces of the less privileged in the society.

“We realized that there are many people on the streets of Accra that with no fault of them they find themselves there so put it on our hearts to put smiles on their face every festive season and also try and take some out from the streets and put them into learning Apprenticeship and give some too education”. HTSF CEO noted

Crotches and Quavers Music Ministry is a music group that preach Christ through music, award heroes and legends who have contributed to the development of church music and also preserve the works of composers. 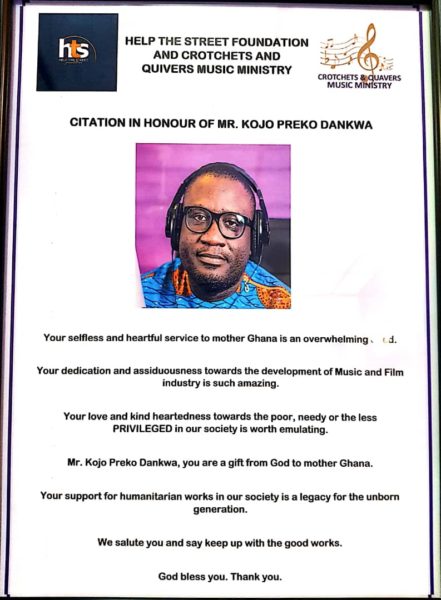 He was adjudged the Best Entertainment Talk Show host of the year at the 2019 RTP Awards.

For his enormous time and effort dedicated to the media fraternity, Kojo Preko was honoured at Africa Tertiary Entrepreneurs Awards 2019 (ATEA).