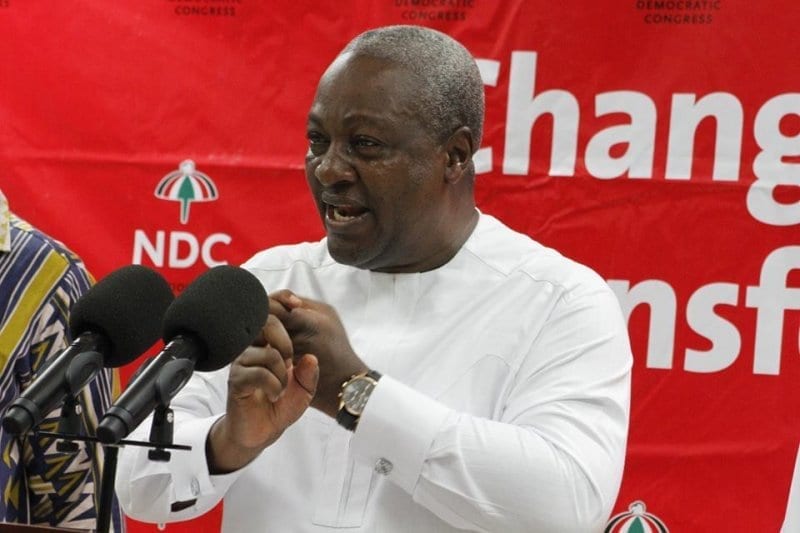 The flagbearer of the National Democratic Congress (NDC), John Dramani Mahama, has assured Ghanaian workers that the next NDC administration will work to complete the processes already in place to review and bridge the remuneration and entitlement of public sector workers and Article 71 office holders.

Speaking at a consultative meeting with the leadership of the Trades Union Congress (TUC) in Kasoa on Wednesday, the former President said the review and establishment of an Independent Emoluments Commission will ensure fairness in remunerations and compensation.

Mr. Mahama noted that the establishment of the Commission was one of the recommendations of the Constitution Review Commission and intended among others to create a fair salary structure for all categories of public sector workers.

“There are other things in there… amend article 71 and set up an Independent Emolument Commission so that from the President right down to the smallest public sector worker, we will have a fair scale to address everybody. It is a commitment that we can make because it was us who superintended over it, so when we come we will continue the process.”

President Mahama, who was accompanied to the meeting by the NDC General Secretary Johnson Asiedu Nketia, a former Vice Chancellor of the UPSA Professor Joshua Alabi, a former Minister for Education Professor Naana Jane Opoku-Agyemang and other party functionaries, said the NDC and the TUC are age-old social partners who share the same ideologies.

“These ideologies are aligned and in consonance with the spirit to fight for the rights of workers”, he noted, adding that as a social Democratic Party, the NDC will continue to focus on putting in place safety nets to cater for both the poor and vulnerable while allowing the market economy, including Ghanaian-owned businesses, to flourish.

President Mahama also condemned the Akufo-Addo led government for using the National Communications Authority to muzzle media houses it considered sympathetic to the NDC. He described the decision of the NCA to close down some radio stations as an affront to freedom of speech and expression.

Mr. Mahama reminded the TUC of the incidents that characterised the infamous Ayawaso West Wuogun by-election and challenged them as stakeholders in the democratic journey, to join in ensuring that the 2020 elections are conducted peacefully and in a transparent manner.

He called on the Electoral Commission to respect the processes including the role of the Inter-Party Advisory Committee (IPAC), noting that Ghana has created a niche for itself in the comity of nations as a model of electoral success in Africa.

General Secretary of the TUC, Dr. Anthony Yaw Baah, in recalling President Mahama’s relationship with the TUC extolled his leadership qualities, referring to him as “a true human being, a man of peace, tolerance and humility”.

“If Prof. Mills was Asomdweehene I, then John Mahama is Asomdweehene II… peace is the greatest legacy any leader can bequeath to a nation”, he stated.

The TUC meeting is part of a series of ongoing engagements and consultations with identifiable groups and key stakeholders ahead of the drafting of the party’s manifesto for the 2020 elections.