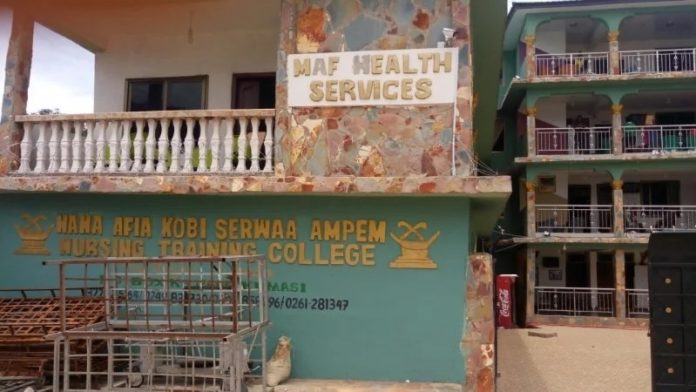 Authorities at the Manhyia Palace have ordered the Management of Nana Afia Kobi Serwaa Ampem Nursing Training College in the Ashanti to change the school’s name, which was named after the late Asantehemaa and mother of the Asantehene.

The college in the past few years has received lots of media attention for the reasons. The school has been at the centre of controversies ranging from accreditation to management issues.

Just last week, the school’s Principal, 37-year-old Samuel Owusu King was arrested for failing to register 52 students for their final exams for which he also supplied past question papers.

The order to take the name: ‘Afia Kobi Serwaa Ampem’ off the school was issued after a meeting of Palace authorities and final year students. The school authorities were also asked to refund the final year examination fee taken from the students.

The action comes after the students petitioned the Asantehemaa Nana Ama Konadu over the conduct of the Principal.

Meanwhile, the Principal, Samuel Owusu King after a meeting with the palace officials told the students on a Whatsapp platform that the school’s name has been changed from the Nana Afia Kobi Serwaa Ampem Nursing Traning College to the Royal Nursing College.