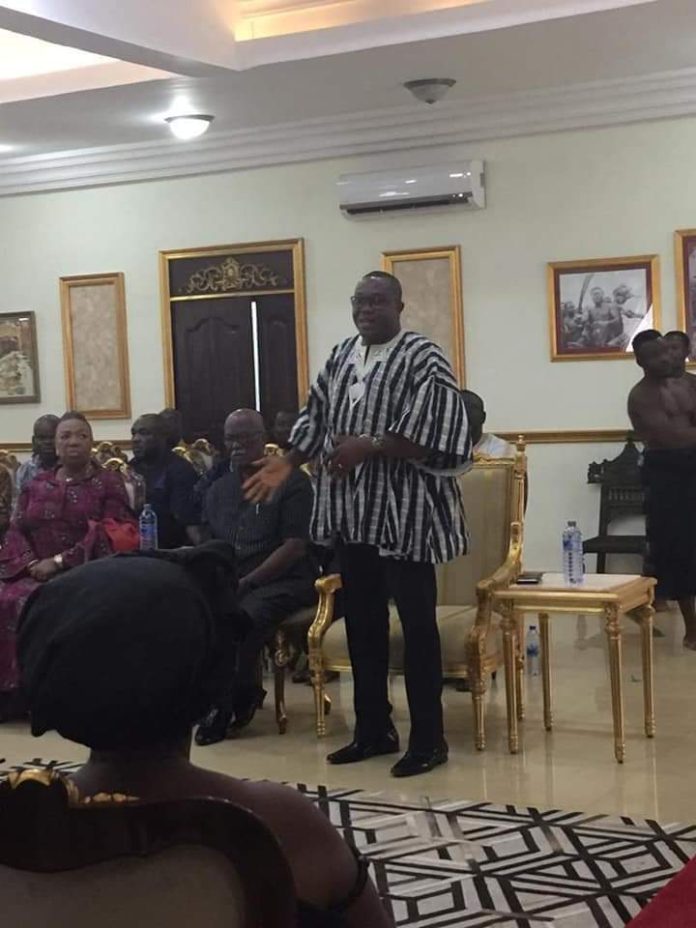 Okyenhene granted clemency to Kwame Zu and forgave him fines of 98 sheep and schnapps demanded by the Traditional Council to pacify the Ofori Pannin stool.

Okyenhene advised Kwame Zu to “go and sin no more” 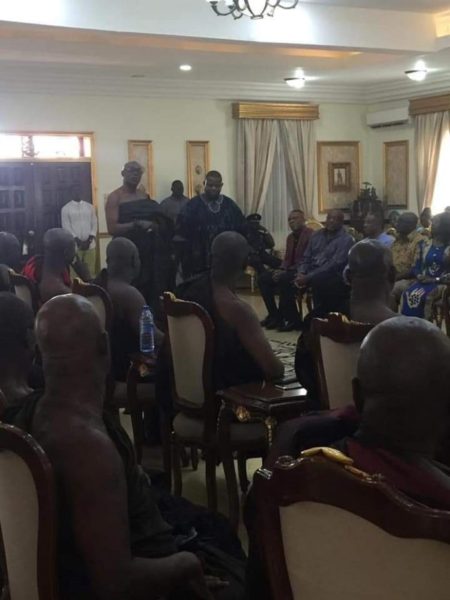 The delegation was accompanied by remorseful Ashanti Regional Secretary of NDC, Kwame Zu. Libation was poured and sheep slaughtered to pacify the gods.

It was after many hours of Closed-door meeting with some subchiefs and Divisional Chiefs constituting the traditional Council before the delegation was able to meet the Overlord of Akyem Abuakwa Traditional area-Osagyefuo Amoatia Ofori Panyin.

According to Okyenhene, he holds no grudge against the NDC party.

The National Chairman of NDC, Samuel Ofosu Ampofo said though Kwame Zu did not speak on NDC Platform, the party felt it must intervene to ensure he apologizes to Okyenhene having condemned his statement.

The Akyem Abuakwa Traditional Council on September 3,2019 issued three day ultimatum to the National leadership of the Opposition National Democratic Congress(NDC) to render a direct,clear and unambiguous public apology to His Royal Majesty Okyenhene Osagyefuo Amoatia Ofori Panin and Okyeman or risk being “banned from all official functions Organized by the Ofori Panin stool and shall be declared Persona non grata in all palaces of the over 940 towns,villages and settlements in Akyem Abuakwa”.

Addressing the media after a protest by Chiefs and subjects of the traditional area at Kyebi, the state Secretary Daniel Marfo Ofori Atta stated that, apart from the apology the Council was demanding “a ritual pacification be performed to appease His Majesty the Okyenhene, an apology rendered personally by Mr.Kwame Zu to the Okyenhene and a Public recantation of the offensive words and specific conduct complained off, and finally invocation of appropriate disciplinary sanctions of the party against the Conduct of Kwame Zu “.

The Akyem Abuakwa Traditional Council stated that “should the NDC choose to ignore these pronouncements and demands, Nananom will not accord them any future request for clemency and redemption of their transgressions”.

The Council subsequently served notice that any Chief in Akyem Abuakwa will be destooled if it acted in aberration to the ban on NDC executives from Branch, constituency, Regional and National Executives should the party fail to apologize.

Traditional Council cataloged various incidents of similar scathing attacks by prominent persons in the NDC including Julius Debrah, Tawiah Boateng, Haruna Appaw Wiredu-both former regional Executives of NDC and Stan Dogbe against Okyenhene over the years under the leadership of John Mahama whom they accused of remaining silent.

The protest by the Akyem Abuakwa was provoked by statement made by the Ashanti Regional Secretary of NDC, Kwame Zu while addressing participants of a demonstration by the Coalition for National Sovereignty that a water treatment project which was provided in the hometown of the current President, Kyebi, saved the Okyenhene from drinking from polluted river with animals .

Responding to this claim, the Traditional Council stated that, “Kyebi has had pipe-borne Water since the year 1954-three Clear years before independent Ghana was born”.

According to the Council, the Kyebi Water Expansion project was initiated by President Kufuor in 2007 “funded by the taxpayers of Austria and completed in 2011 under President Mills” commending Former President Mahama for commissioning it.