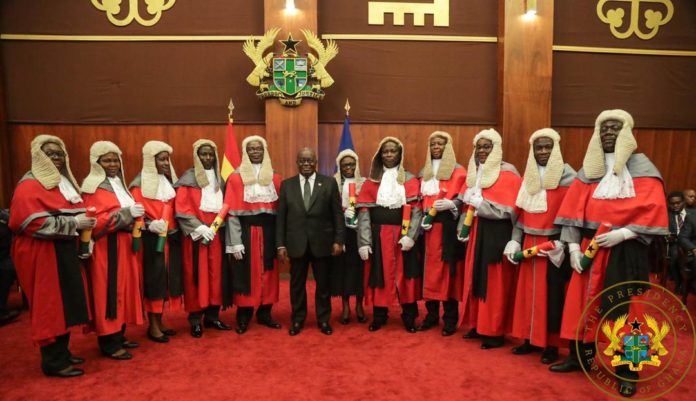 President Akufo-Addo has drawn the attention of some forty five (45) newly appointed Justices of the Supreior Court of Judicature (High Court and Court of Appeal) to the fact that the people of Ghana will not in anyway accept the repetition of the 2015 Judicial Corruption exposé by Anas Aremeyaw Anas, that led to the removal of several Judges from the Bench.

In his statement after administering the Oath of Office, the Judicial Oath and the Oaths of Secrecy to newly appointed High Court and Court of Appeal Justices as well as attendees of the swearing-in ceremony at the Banquet hall of the Jubilee House, President Akufo-Addo, charged the new Justices to conduct themselves such that issues of corruption will not be found amongst them.

“It will be remiss of me on such as occasion not to draw your attention to recent events that shook public confidence in the Judiciary, and that is the exposé conducted by the well known investigative journalist, Anas Aremeyaw Anas into Judicial Corruption which led to the removal of several judges. The people of Ghana cannot and will not tolerate the repetition of the abysmal dismal tale of acts of corruption that were revealed. You have a big duty to demonstrate integrity in all your dealings if public support in the Judiciary is to be maintained” President Akufo-Addo stated.

Quoting the Latin phase, “Interest Reipublicae Ut Sit Finis Litum” which is translated, “It is in the interest of the State that litigation must come to an end”, President Akufo-Addo admonished the High Court Justices “to carry out their duties as the Court of first instance such that most Judicial proceedings will end at their door steps and there by accelerate the process of Judicial administration”.

Justice of the High Court, Justice Aboagye Tandoh and
Justice of the Court of Appeal, Justice Anthony Oppong, in response to the charge of the President on behalf of their colleagues noted that they are well aware of the task and responsibility placed on them as judges of the Superior Court of Judicature. They assured the President that they will discharge their duties without fear, favour, affection or ill-will.

Don’t expect much from Special Prosecutor this year – Azeem