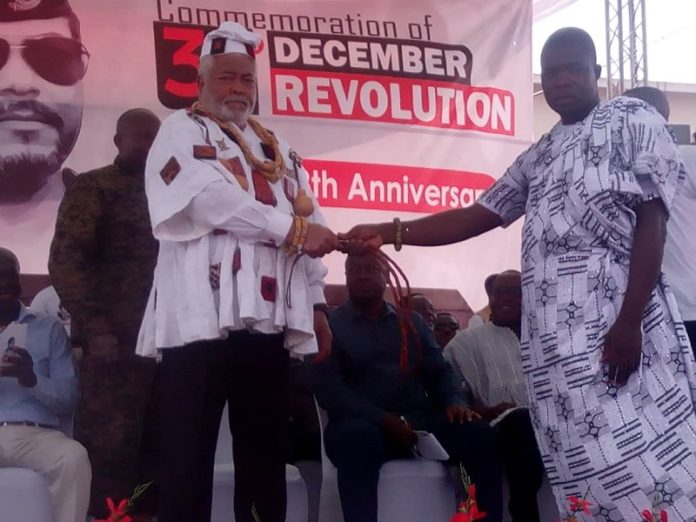 Ex-President Jerry John Rawlings has been enstooled as a warrior chief by the Chiefs and elders of Winneba in the Effutu Constituency of the Central Region.

According to the Chief and elders, Mr Rawlings was given the stool name ‘Nana Okogyeaman’ (Warrior) at the colourful event because he fought well for Ghana as when he was the Leader.

The enstooled took place ahead of the 38th-anniversary celebration of the 31st December revolution, on Tuesday, December 31

The Ex-President is scheduled to address the scourge of monetization in Ghana’s electoral politics which is the theme for the celebration.

The commemoration which will take place at the Winneba Lorry Park with a durbar of Chiefs and people will have leading cadres including the architect of the revolution, former President Flt Lt Jerry John Rawlings as speakers.

The 31st December 1981 revolution ushered in a period of economic and political transformation that culminated in the re-establishment of lasting constitutional rule in 1992. The revolution also gave birth to the National Democratic Congress which won elections in 1992 and 1996 under the leadership of Flt Lt Jerry John Rawlings.